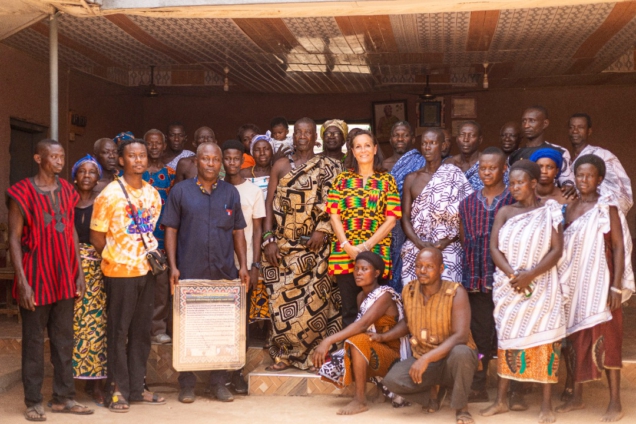 The French Ambassador, Anne Sophie-Avé, together with her manager and team were in Kumasi and some parts of the Bono region as part of her ‘Meet and Connect” initiative.

According to her, the initiative was propelled by the hospitality exhibited by Ghanaians to her after her appointment in the office.

In an interview, she said, as a result of this kind gesture from Ghanaians, “I decided to embark on a ‘Thank You’ tour to show my appreciation and also meet and connect with the youth in Kumasi and Sunyani.”

She added that “the only way you can get to know a country is by being in contact with the youth, as they are the ones who will shape tomorrow.”

The French Ambassador, during her tour, also visited the chiefs and people of Begho in the Bono Region, where she was installed as the Nkosuahemaa (Development Queen) of the town, under the stool name “Nana Benneh III”.

She donated stationery, footballs and other items to the people of Begho.

Additionally, the Ambassador was also in Kumasi to meet the Pro-Vice Chancellor of KNUST and the National Union of Ghana Students (NUGS-KNUST) leaders. She was also honoured with a citation for her dedicated, loyal and faithful service to Ghana.

She also had an interaction with her fans in Kumasi during the ‘Meet & Connect’ session.