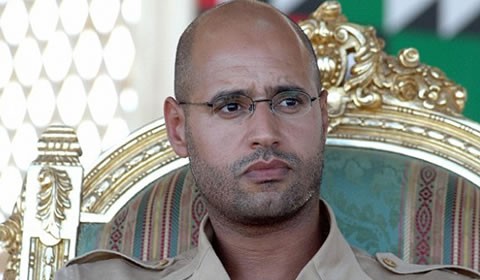 Col Gaddafi’s son has said he wants to be put on trial in The Hague, rather than in his home country, his lawyers have said.

Saif al-Islam said if he was executed after a trial in Libya then it would be tantamount to murder, according to documents submitted to the International Criminal Court.

The 40-year-old is being held by militia in the city of Zintan.

He has been indicted by the ICC for crimes against humanity.

Libya’s interim government has so far refused to hand him over for trial in the Netherlands, where the international court is based, arguing that he should face justice in his own country.

Col Gaddafi, whose autocratic rule lasted for 42 years, was killed in unclear circumstances after being captured by rebels in October, in an act criticised by rights groups.

“I am not afraid to die but if you execute me after such a trial you should just call it murder and be done with it,” Saif al-Islam was quoted by lawyers as saying.

In June, a team sent by the ICC were arrested after meeting Saif al-Islam, and held for more than three weeks.

The documents filed to the court said that during that meeting an official who had pretended to be an illiterate guard had stopped an ICC lawyer from taking a sworn statement from Saif al-Islam.

“The ‘guard’, who is actually Mr Ahmed Amer – a councillor who speaks several languages – was planted in the room to deliberately trick the delegation,” the filing said, according to Reuters.

“He came back into the room and (in the presence of the ICC interpreter), started shouting that this statement was very dangerous, violated Libyan national security, and that the Defence could not have it back.”

The meeting was cut short after 45 minutes and their documents were confiscated, the lawyers said. The team were later detained.

The actions of the authorities appeared to show they viewed it as “illegal, treason, or a violation of national security for either Mr Gaddafi or his Counsel to indicate that Mr Gaddafi does not wish to be tried before Libyan courts”, the lawyers said in the filing.

Libyan officials accused lawyer Melinda Taylor, who was leading the ICC delegation, of smuggling spying devices and a coded letter to Saif al-Islam during the meeting.