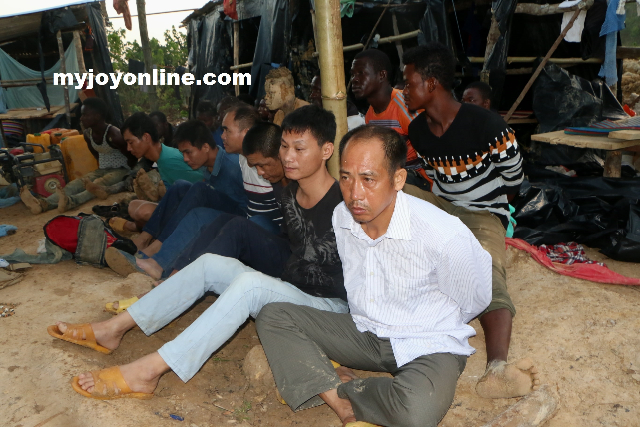 Preliminary investigations by the Environmental Protection Agency (EPA) have revealed, excessive use and presence of cyanide in water bodies due to illegal mining activities at Aboso in the Western Region.

But EPA says its initial investigations revealed the presence of cyanide as it sends samples to the laboratory for further examination.

The arrest comes a day after the Operation Vanguard team arrested seven Chinese and 20 local illegal miners in Bremang and Brofoyeduru in the Central Region.

The illegal miners, who have been operating from six different sites few meters away from the Aboso Township, had set spies to alert them of any intruders, including security agencies.

But they were outwitted on Tuesday morning by the anti-galamsey taskforce who invaded the camp and arrested four of them, including one Bright Oduro, described as a kingpin.

Public Relations Officer of Operation Vanguard, Squadron Leader Omane Agyei, has been explaining to JoyNews how the illegal miners were arrested.

“Kudos to personnel of FOB [Forward Operating Base] West.They first have to do recognisance and that one they have to do [it] in plain clothes before they sprung the attack. They [personnel] had so many difficulties because when they [miners] see a newcomer come into their site, they will be apprehensive to the extent that there were so many tactics that were deployed to enable us to come and spring this attack.”

According to Senior Programs Officer at the Tarkwa office of the EPA, Moses Musah Kpebu, samples of substances believed to be cyanide and other toxins have been taken for further laboratory tests.

“We’ve taken the samples to the lab for analysis; the slurry and the solution, and other chemicals that were detected.”

He says the EPA is concerned about the harmful effects of cyanide on human and animal lives as well as the environment.

“Cyanide kills instantly. You can be killed in five minutes when you ingest it so we are very particular about cyanide and when it gets into water bodies, it can kill a whole village in just second, ” Mr. Kpebu revealed.

Meanwhile, Mr. Kpebu hints of further investigations to be conducted to ensure the safety of residents.

He says boreholes could be under threat of being contaminated by cyanide which could settle on underground water.