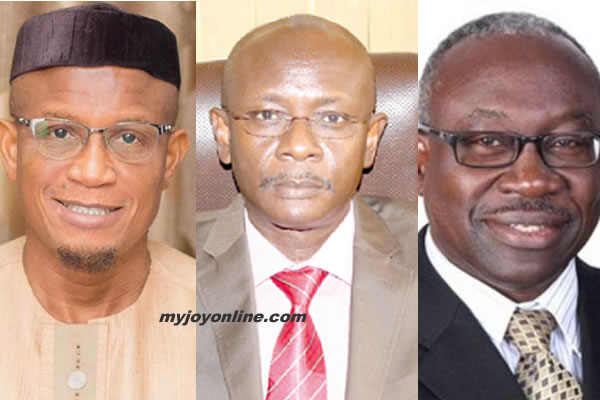 'Sacked' Director-General of the Ghana Broadcasting Corporation Dr. Kwame Akuffo Anoff-Ntow was victimised over the implementation of the controversial TV licence fees, a letter from the Board has confirmed.

The Director-General was asked to proceed on leave, a Ghanaian political euphemism for sacking.

The decision to prosecute caused a social media uproar and ultimately led to a reversal of the entire plan to collect TV licence fees and prosecute defaulters.

Dr. Anoff-Ntow was also a casualty of the fiasco.

But details of a GBC Board letter confirms Dr Anoff-Ntow's decision was not single-handed.

The Board was emphatic that the Director-General "did not take a unilateral decision since his action was a result of the decision of the previous Board whose term ended in September 2017".

The Board in a letter to the Information minister Mustapha Hamid, signed by Board chairman Rev. Prof. Emmanuel Adow Obeng said it was of the opinion that the "right processes were followed" when the Director-General asked for a special court.

But after the January 10th letter, the Board would do an embarrassing u-turn five days later asking the Director-General to proceed on leave.

In a January 15th letter, the Board said: "there was no authorization by this Board or the previous Board to invoke any processes for the prosecution of defaulters".

In an emphasis, it said the Director-General "did not seek authorisation before embarking on such a major policy intervention that has far-reaching implications".

The Board Chairman Rev. Prof. Emmanuel Adow Obeng said he had been directed that the embattled D-G hand over to him.

The Board chairman's claim that authorisation was not sought is however also contradicted by an 11 September 2017 letter to the Chief Justice Sophia Akuffo in which the D-G sought her assistance on the prosecution of defaulters.

The Board was aware of this letter or at least the chairman was copied.

The Information minister Mustapha Hamid was also aware of the TV licence fee collection project launch scheduled for Tuesday 31 October 2017 at GBC. He had been invited by the Director-General in a letter dated 24th October 2017.

The Board Chairman was also expected to feature in the launch.

The proceed on leave move has been condemned as illegal while commentators have urged Dr. Anoff Ntow to proceed to court.

The GBC Director-General is appointed by the National Media Commission which has the final say in his stay in office or otherwise.

But it was the Board which had previously backed its Director-General that would later sack him.

11th September 2017: Director-General writes letter to the Chief Justice Sophia Akuffo seeking her assistance on the prosecution of defaulters.