George Floyd death: Why US protests are so powerful this time 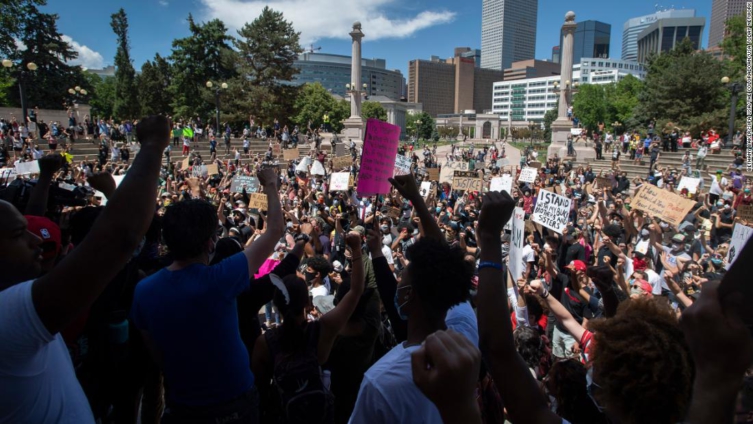 May 29, 2020; Denver, Colorado, USA; Protesters chant in Civic Center Park during a protest in response to the police killing of George Floyd, an unarmed black man in Minneapolis, in Denver, Colo. on Friday, May 29, 2020. Mandatory Credit: Bethany Baker/The Coloradoan via USA TODAY NETWORK/Sipa USA

Thousands of Americans are taking to the streets to protest about racism – many for the first time in their lives. Why has this particular tragedy struck such a chord?

George Floyd is not the first African American whose death in police custody sparked protests.

There were also rallies and calls for change after Tamir Rice, Michael Brown and Eric Garner were killed by police.

But this time seems different, with the response more sustained and widespread. There have been demonstrations across the US – in all 50 states and DC – including in cities and rural communities that are predominantly white.

Local governments, sports and businesses appear readier to take a stand this time – most notably with the Minneapolis city council pledging to dismantle the police department.

And the Black Lives Matter protests this time seem more racially diverse – with larger numbers of white protesters, and protesters from other ethnicities, standing with black activists.

A number of different factors combined to create “the perfect storm for rebellion” over George Floyd’s death, Frank Leon Roberts, an activist who teaches a course on the Black Lives Matter movement at New York University, told the BBC.

A police officer, Derek Chauvin, kept his knee on Mr Floyd’s neck for nearly nine minutes – even as Mr Floyd repeatedly said “I can’t breathe” and eventually became unresponsive. The incident was clearly recorded on video.

“In many previous instances of police violence, there’s a possibility of an ambiguous narrative – there’s a partial view of what happened, or the police officer says they made a split-second decision because they feared for their life,” Mr Roberts said.

“In this case, it was a completely unambiguous act of injustice – where people could see this man [Floyd] was completely unarmed and incapacitated.”

Many who joined the recent protests were first-time protesters, who said seeing George Floyd’s death made them feel that they simply couldn’t stay at home anymore.

“There are hundreds of deaths that aren’t caught on video, but I think the gruesomeness and obvious hatred of the video woke people up,” Sarina LeCroy, a protester from Maryland, told the BBC.

Similarly, Wengfay Ho said she had always supported the Black Lives Matter movement, but George Floyd’s death was a particular “catalyst” that prompted her to take to the streets for the first time.

It “prompted a lot more emotion, and the call for change is so much more urgent right now”.

It comes during a pandemic, and high unemployment

“History changes when you have an unexpected convergence of forces,” argued Mr Roberts.

Mr Floyd’s death came in the middle of the coronavirus pandemic that has led to Americans being ordered to stay in their homes, and sparked the highest level of unemployment since the Great Depression in the 1930s.

“You have a situation where the entire country is on lockdown, and more people are inside watching TV… more people are being forced to pay attention – they’re less able to look away, less distracted.”

The pandemic has already changed the way we live and work, and led to many Americans at home “asking themselves what parts of normal are no longer acceptable”, he added.

And on a practical level, the US’s 13% unemployment level means that more people than usual can protest and campaign without juggling work commitments.

‘It was the last straw’

Mr Arbery, 25, was shot on 23 February while jogging in Georgia, after residents said he resembled a burglary suspect. Breonna Taylor, 26, was a health worker who was shot eight times when police entered her flat in Kentucky.

Both their names have featured on placards at the latest Black Lives Matters protests, with demonstrators being urged to chant Ms Taylor’s name.

Mr Roberts described Mr Floyd’s death as “the last straw for many communities”, adding that the fact this happened during the summer, when people want to go outdoors, is also significant.

The fact that this is an election year also means that politicians are more likely to pay attention and respond, he said.

While there is no hard data on the ethnicity of protesters, many of the demonstrations appear to have a high proportion of supporters who are not African American themselves.

For example, in Washington DC, tens of thousands took to the streets on Saturday – and about half the crowd appeared to be non-black. Many protesters brought placards that specifically highlighted their desire to be allies to the movement.

Part of this could be down to a shift in opinion.

A poll for ABC suggested that 74% of Americans felt that the killing of Mr Floyd was part of a broader problem in the treatment of African Americans by police.

This was a sharp rise from a similar poll in 2014, following deaths of Michael Brown and Eric Garner – where 43% of Americans felt that those incidents reflected a broader problem, ABC reported.

While the Black Lives Matter movement has “always been multi-racial… white folks in the US don’t really have a vocabulary for talking about race”, Mr Roberts said.

“It’s uncomfortable, and they think any conversation about racism is an attack on their very existence, or feel they don’t have licence to speak out in case they offend someone.”

However, he said he now sees more white allies speaking up, and “feeling more comfortable with being uncomfortable”.

In addition to huge rallies in major cities, there have also been protests in small towns, including in Anna, described locally as one of “the most racist places” in Illinois and Vidor, in Texas, which was once infamous as a stronghold of the Ku Klux Klan white supremacist group.

The fact that the circumstances around Mr Floyd’s death seemed particularly clear-cut may have also made it easier for people to unite.

In one opinion piece, titled “My tiny, white town just held a protest. We’re not alone“, journalist Judy Mueller said she was “gobsmacked” to see about 40 people at a vigil in Norwood, Colorado.

The vigil organisers there said “support for police and Black Lives Matter are not exclusive”, while a local town board trustee, Republican Candy Meehan, said “I don’t think this is a political matter… wrong is wrong.”

Eric Wood, a DC resident, said he joined demonstrations after Trayvon Martin’s death in 2012, and Breonna Taylor’s death earlier this year, but the latest wave of protests were “probably the biggest yet”.

“African Americans and minorities have been protesting this [racism] for years. Our voices clearly do not hold as much power as if we’ve got some of our white counterparts to help us.”

Meanwhile, Mr Roberts argued: “History has been clear that the people who need to change before the dam breaks are people who have been beneficiaries of the existing systems.”

Did police actions have an impact?

The vast majority of protests across the US were peaceful – and in several cases local police officers also showed their support.

However, there were some high-profile confrontations and clashes between protesters and police.

Last week, authorities forcibly removed peaceful protesters from a square outside of the White House. Shortly afterwards, President Donald Trump crossed the street to have his photo taken in front of a church.

Some demonstrators took to the streets after they felt police used excessive force.

Ben Longwell and Justine Summers said they were medical workers who decided to join the protests in DC – despite the difficulty of maintaining social distancing – as a result of police actions.

“This is the first time in my life I’ve been afraid of the police,” Mr Longwell said.

Meanwhile, Ms Summers said she had not planned to take part – but “when I heard about how violent the police were getting… it seemed like a thing that I needed to do”.

One poll conducted for CNN suggested that 84% of Americans felt peaceful protests in response to police violence against African Americans was justified, while 27% said violent protests were also justified – although support for violent protests was split sharply along political lines.

“The reality is we don’t want anyone hurt. But we also have to realise that as a political and media strategy, for better of worse, rioting is often a way for activists to ensure that cameras stay on the issue,” said Mr Roberts.

Where could these protests lead?

Many demonstrators have been calling for specific changes – including making it mandatory for police officers to wear body cameras, reducing funding for police forces, or encouraging more people to vote.

Mr Roberts said it was too early to tell whether the current protests would lead to lasting change – “remember the civil rights movement [of the 1950s and 1960s] went on for over a decade.”

However, he was also hopeful, saying: “We live in a country where it only takes one Rosa Parks-like moment to change things.”

Rosa Parks was arrested after she refused to give up her seat for a white man in 1955 – sparking boycotts, and a mass movement which eventually led to ground breaking civil rights legislation in 1964.

Many protesters in DC over the weekend also felt that they were on the cusp of a historic moment.

“We are at a point where things could really change,” said Laura Hopman, adding that she brought her two nine-year-old sons with her because “I want them to be a part of this – to make it a turning point in their lives and many other peoples’ lives.”

Dylan Pegram, 10, was also with there his dad, on his first-ever march.

“I found it kinda stressful, but at the same time it’s kinda good, because we need change,” he said.