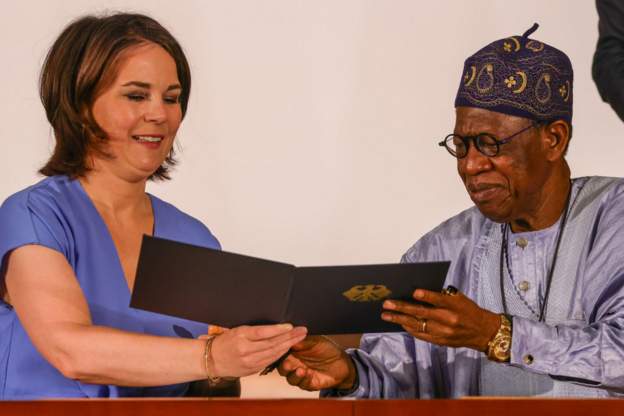 Germany and Nigeria have signed an agreement to hand over ownership of more than 1,130 Benin Bronzes looted during colonial times that are held in several German museums.

German Foreign Minister Annalena Baerbock and Nigerian Information and Culture Minister Lai Mohammed were among senior officials who inked the deal in Berlin on Friday afternoon.

Nigerian ambassador to Germany Yusuf Maitama Tugga told the BBC this means the immediate return of two works, which are being taken to the embassy and will be back in Nigeria “possibly as early as next week”.

The UK Guardian newspaper quotes Hermann Parzinger, the head of the Prussian Cultural Heritage Foundation, as saying: “The return is a milestone in the process of reappraising colonial injustice in the field of museum collections.”

The term Benin Bronzes refers to thousands of metal sculptures and ivory carvings made between the 15th and 19th Centuries and looted by British troops in 1897 from the West African kingdom of Benin, in modern-day Nigeria’s Edo state.

Many of these priceless stolen artefacts are held by museums across the world – and there has been a push in recent years to get them returned home.

“It’s a historic moment for us,” Abba Isa Tijani, director of Nigeria’s National Commission for Museums and Monuments (NCMM), told Germany’s Deutsche Welle news site ahead of the ceremony in the German capital.

The Artnet website reports that many of the artefacts will be returned to Nigeria before the end of this year while some will remain on long-term loan at the Humboldt Forum in Berlin.