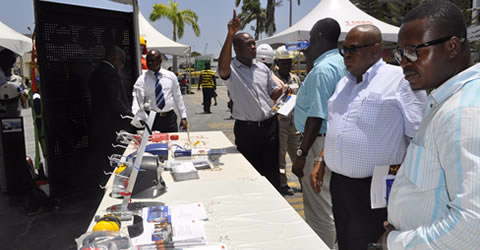 Ghacem Limited has climaxed its annual ‘Safety Week’ with extensive programmes at its Tema and Takoradi Factories.

A key message of the safety week was a call on workers to make safety a concern for all.

The climax of the prorammes was a grand Durbar, observed concurrently at both factories of the leading cement manufacturer aimed at raising awareness on health and safety practices at the workplace. It was also used to reward the company’s best workers for the year 2013.

Mr. Gideon Etornam Vulley of the Shipping & Logistics Department at the Tema plant was adjudged overall best worker and took home a framed citation, a plaque and a cash prize of GHc 10,000

Mr. James Kwabena Egyir of the Electricals department at the Takoradi plant occupied the 1st runner up spot and received a plaque and GHc 7,000 as cash prize, whilst Mr. Joseph Tettehfio of the Quality Assurance Department at the Tema plant won the 2nd Runner up position, taking home a cash prize of GHc 5,000

The durbar, themed “Health & Safety, It Takes all of us”, were also used to demonstrate Health and safety awareness programs and introduction of protective equipments (PPE’s) for the workers.

In his address the Managing Director (MD) of Ghacem, Morten Gade, said the company had invested a lot to ensure health and safety was a prerequisite in all aspect of work at the company

“The Board and Management of the company are committed to achieving “O” lost time injury for all aspect of work in the ensuing years” hence would entertain no excuses from staff who waived safety rules and regulations.

He however commended the award-winners for their hard work, commitment and dedication to duty and asked other staff to use the occasion to rededicate themselves towards emulating such example

The Environment Health and Safety Manager, Mr. Joseph Mensah who presented various awards to the workers for ensuring health and Safety at their departments commended their effort noting that such a step would go a long way to enhance work output and productivity

On his part, the Strategy and Corporate Affairs Director, Dr. George Dawson-Ahmoah called on the workers to embrace the health and safety efforts by the company touting that the theme was appropriate hence “it should be walked but not hanged”