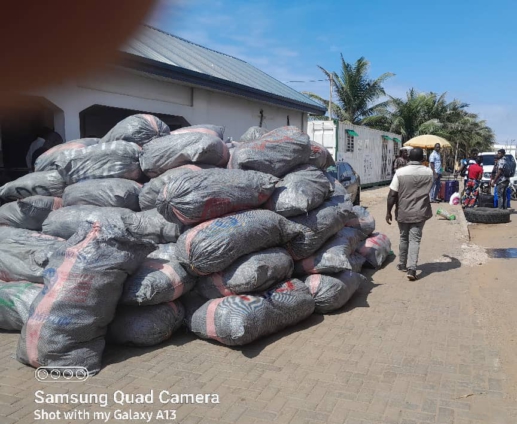 Information reaching JoyNews is that officers of the Ghana Armed Forces (GAF) in Aflao have arrested a Benz Cargo truck with registration number GE8404-13 loaded with 153 sacks of substances suspected to be cannabis at Wudoaba in the Ketu South municipality.

According to the sources, from the operatives of Defense Intelligence wing of (GAF), the driver of the vehicle, Mr. Vincent Abo, aged 43 years, and his two accomplices, Ahiawo Kodzo and Seth Hefu were arrested in the process.

The suspects, together with the exhibits, including the vehicle will be transported to Narcotics Control Board Headquarters in Accra later today for further action.

The suspects are said to be natives of Ho. They loaded the goods from Kpeve and were transporting them to Nigeria, Benin or Togo.

Speaking to the MCE for Ketu South, Maxwell Lugudor on phone, he said his outfit is doing everything possible to make sure these illegal activities are reduced drastically or even stopped.

Mr. Lugudor noted with worry that, the municipality is becoming a hub of these illegal activities, a situation he said is a great worry to the authorities. Nonetheless, the Municipality is doing its very best to make sure that such activities are stopped.

DISCLAIMER: The Views, Comments, Opinions, Contributions and Statements made by Readers and Contributors on this platform do not necessarily represent the views or policy of Multimedia Group Limited.
Tags:
Aflao
Cannabis
Ghana Armed Forces