Ghana at the Olympic Games - MyJoyOnline.com

Ghana at the Olympic Games 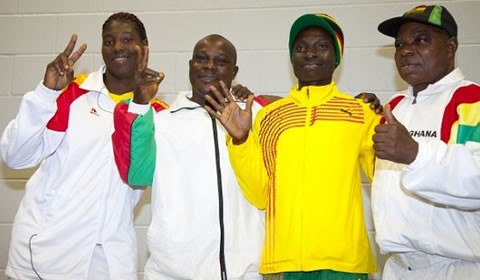 The Olympic Games comes along for some countries as a time to flaunt what they are endowed with. Indeed, the Games also afford these same countries the opportunity to do sublime market. With the International Olympic Committee regarded as the biggest global organization with respect to membership, shining at its flagship tournament, The Olympic Games, also regarded as the world’s biggest multi-sport event, provides a horizon of impactful leverage. No wonder, African nations like Kenya, Sudan and Ethiopia on one hand and Caribbean nations like Jamaica, Bermuda, St. Kitts and Nevis are thrown into reverie and ineffable excitement anytime the Olympics is around. At least, it is the period when those countries, hitherto not accorded any modicum of respect, are given standing ovations.

Ghana’s medal haul
Unfortunately, Ghana has not got it right in the Olympics for certain inexplicable reasons given the diversity of sports in the country and the medal opportunity available at each Games. As many as 35 disciplines go on show with the cynosure of all eyes, of course, being the track (and field) events. Ghana’s Olympic Committee fortunately comprises federations of more than half of the disciplines that are competed for at the Olympics. Unfortunately, this has not shown in Ghana’s performance over the years. It is surprising to know that Ghana’s medal haul since first participating in the Olympics in 1952 is FOUR. And even breaking that down, boxing and football are the only disciplines to give the country these medals – boxing has three while that Barcelona 1992 Bronze-winning feat by the Black Meteors gives football one. Let me state that Ghana has never won gold at the Olympics. Light-welterweight boxer Clement Quartey won Ghana’s most valuable and only Silver medal at the Rome 1960 Games. Given the country’s diversity in sports, one tends to wonder whether any headway is being made by the various federations.

Olympics: 1952 – 1988
Indeed, the 1952 Games held in Helsinki, Finland was the first for the country and expecting medals from the 7 Olympians was like expecting President John Mahama to appoint Nana Akufo Addo as his Vice President. I must quickly add that James Owoo made it to the finals of the men’s High Jump though. Unfortunately, Ghana missed the 1956 Games in Melbourne, Australia but made amends in 1960 when, under the Presidency of Osagyefo Kwame Nkrumah, the country won its first Olympic medal. Incidentally, it remains the highest achievement by Ghana in its history in the Olympics. Kwame Nkrumah, with the able support from his sports secretary, ensured that Ghana’s favourite sport of football got onto the Olympic stage. The footballers managed this feat in the next three Olympics affording some footballers the unsung title of three-time Olympians – Rev Osei Kofi being one of these lucky ones. It is worth mentioning that a light-welterweight boxer in Eddie Blay Snr won the country’s second Olympic medal in Tokyo, Japan. The 1968 games came without any medals. Perhaps, the sportsmen and sportswomen were falling to the ‘guile’ of the Olympic Creed, which goes the most important thing in the Olympic Games is not to win but to take part…. In Germany, during the 1972 Munich Games, Prince Amartey, a middleweight boxer secured Ghana’s third Olympic medal. He however became the last individual medalist for Ghana in the Olympics. It is worth noting that Ghana boycotted the next two Games in Montreal and Moscow. Ghana boycotted the 1976 Games to protest the apartheid in South Africa and Reunion. Indeed, the boycott was also against New Zealand, who had travelled to South Africa with their rugby team. The country also joined the American-led boycott of the 1980 Games. This was because of the Cold War against communist Russia. Indeed, reports are that Ghana would have gotten medals at these Games as Azumah Nelson, for instance, was at his peak as an amateur then. It was around that same period that the likes of Francis Dodoo were breaking African records.

Olympics: 1992
Ghana’s next medal, after Amartey’s, came 20 years later in Barcelona where the Black Meteors became the first senior African football team to win a medal. As if that 1992 feat was a magic wand, African countries viz Nigeria and Cameroon won the next two Olympic men’s football tournaments in Atlanta and Sydney respectively.

Given the demographic restrictions on most disciplines at the Olympics, the track and field events are considered the most followed at any Olympic Games. It is when the crème de la crème manipulate their limbs to move faster, jump higher and longer and throw longer just as encapsulated in the motto of the Olympics – Citius, Altius, Fortius.

Olympics: 2000
Ghana had not come closer to winning a medal on the tracks and fields, after the likes of Michael Kofi Ahey, Robert Kotei, James Owoo, Joshua Owusu and Alice Anum, than in the Sydney 2000 Games. Aziz Zakari surprisingly made it to the finals of the men’s 100m event but failed to finish because of a hamstring. Leonard Myles Mills and Vida Nsiah managed to get into the semi-finals of the 100m events though. The women’s 4 X 100m team also managed a semi-final place. The four boxers presented, Raymond Narh, Ben Neequaye, Osumanu Adama and Charles Adamu, failed to make it beyond the second round.

Olympics: 2004
In 2004 in Athens, a hopeful football contingent failed to progress beyond the group stage though they had the same points with eventual bronze winners, Italy. A painful 1-0 loss to Japan in the last group game was their undoing. Aziz Zakari again made it to the finals of the men’s 100m but had to crumble again to a hamstring. Leo Myles Mills was in the semi-finals again though. Ignisious Gaisah and Margaret Simpson were the revelations for Ghana, however, as they came 6th and 9th in their respective events. Eric Nkansah, Christian Nsiah, Vida Anim, Andrew Owusu, Mariama Salifu, Samuel Adade and Akosua Serwaa failed to impress.

Olympics: 2008
The Beijing 2008 Games saw a dip in Ghana’s performance. Aziz Zakari could not reach even the semi-finals of the men’s 100m, Seth Amoo failed in the 200m while flagbearer Vida Anim did not even race in the women’s 200m. She however reached the semi-finals of the women’s 100m. The best of the six boxers were Captain Manyo Plange and Samir Bastir, who reached the second round.

Olympics: 2012
London 2012 will witness Ghana parading nine Olympians – 3 track and field athletes, 4 boxers, one judoka and one weightlifter. Ignisious Gaisah and Margaret Simpson will try to better their results eight years ago after they both missed the last edition due to injuries. Vida Anim can as well better her performance in the last edition while the 4 boxers, Isaac Dogboe, Sulemanu Tetteh, Maxwell Amponsah and Duke Micah, judoka Emmanuel Nartey and weightlifter Alberta Ampomah will get blooded to give Ghana hope in the next Olympics. It is a tall order given the events at the GOC prior to London 2012 but getting a medal is possible.