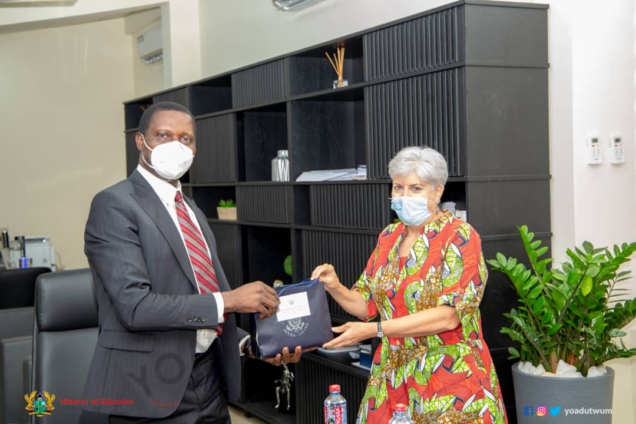 Minister presenting a gift to the US Ambassador

The United States (US) Ambassador to Ghana, Stephanie Sullivan, has hinted that 150 American Peace Corps will be arriving in Ghana in September this year to support the nation’s development and transformation agenda.

She explained that most of the Peace Corps upon their arrival would be focusing on the teaching and development of Science, Technology, Engineering and Mathematics (STEM) which held the key to the transformation of the country and the rest of the world.

Ms Stephanie Sullivan announced this when she paid a courtesy call on the Minister for Education, Dr Yaw Osei Adutwum in Accra on Tuesday.

The visit was to deepen the ties between the two countries which date back to several decades.

She lauded the Ghana government for the effort it was making towards poverty reduction through education.

The Ambassador stated that the US is currently assisting the country in various forms through the United State Agency for International Development (USAID) being the main implementer of many of such projects.

She mentioned the Early Grade Reading for pupils in Basic Schools which targeted more than 250,000 pupils in the country and the Ghana Learning Radio programme as some examples of projects it was supporting.

Ms Sullivan pledged U S government’s readiness to partner the Ministry of Education, Ghana Education Service and all other agencies to help improve lives of the people in the country.

Dr Yaw Osei Adutwum, on his part lauded the US for its unflinching support to Ghana over the years which had brought much development to the nation.

He assured the Ambassador that the Akufo Addo-led government would continue to do more to ensure that both countries benefitted from the relationship.

Dr Adutwum said, “let us be proud that someday we will be able to tell the world that we were part of the transformation of the country through education”.

He stated that the government would continue to put in place measures that stood the chance of transforming the fortunes of the country to enhance the standard of living of the people in the country.

He mentioned increased access, equity and easing the burden of parents whether they had money or not as being the main reasons why the FSHS initiative was introduced in the country.

Ghana became the first country in the world to receive American Peace Corps Volunteers in 1961 and the programme has been running uninterrupted for more than 50 years.

This has brought lots of development to the country in diverse ways especially in the rural areas where most of the volunteers are usually posted to.

Most of the Peace Corps Volunteers who came to the country in the past were posted to support the health, agriculture and education sectors among others.

The Education Minister and the Ambassador used the occasion to exchange gifts as a sign of appreciation to each other for the roles they were playing for their countries.