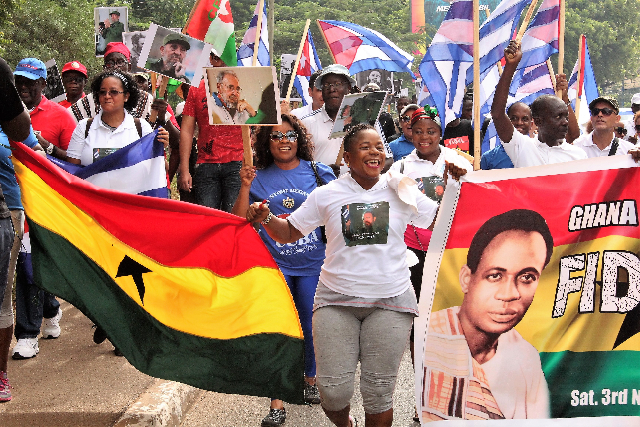 The death of Cuba’s revolutionary leader Commandante Fidel Castro, continues to send vibrations across the world, with Ghana marking his death in a special way.

The leadership of the Trade Union Congress, members of the Cuba Medical Brigade and hundreds of Ghanaians, have held an hour long march through the principal streets of Accra, in solidarity with the government and people of Cuba in memory of the iconic leader who passed on November 25, 2016 at the age of 90.

Carrying flags of Cuba and Ghana with images of Fidel, the march organised under the banner “Ghana loves Fidel” started from the forecourt of the Ghana Broadcasting Corporation (GBC), and along the road in front of the Flagstaff House, the seat of Government to the 37 Military Hospital, ending at the residence of the Cuban ambassador.

In an address, His Excellency Pedro Luis Gonzalez, the Cuba Ambassador to Ghana, who took part in the march, expressed satisfaction at the bond of friendship between the people and governments of Ghana and Cuba and the explicit show of solidarity with Cuba, following the death of its former leader, Fidel Castro.

“Fidel Castro loved Africa very much and so does all of Cuba; Ghana has made a very bold statement today that Ghana-Cuba relations will grow in strength to the benefit of our peoples and for all of humanity. Fidel has taught us that poverty, disease and illiteracy are not natural and can be eradicated.”

Brother Alexander Nyarko Opoku, First Vice Chairperson of the TUC, recalled that the triumph of the Cuban revolution in 1959 served as a source of motivation to all people across the world, who sought to bring about meaningful development in their societies.

He said Fidel Castro placed much relevance on the essence of workers unions and the creation of a critical mass of revolutionary professionals, imbibed with love for country and humanity, and with the willingness to render the utmost sacrifice.

He added that Fidel had proven in deed that poverty and disease and oppression were not given and that it was possible to change all that militated against the suffering people of the world.

A message of solidarity read by Nana Yaa Gyanfuah of the All African Peoples Revolutionary Party read:

“Revolutionary Cuba and Comrade Fidel, in addition to liberating the small island nation of Cuba from the web of imperialist domination and building a self-reliant democratic state, has also developed and institutionalized a culture of international solidarity with the struggling masses throughout the world.

“Cuba has opened its arms to African youth both born in Africa and the diaspora, training thousands of African doctors free of charge so that they could return to their communities and serve the health needs of their people.

Cuba has deployed even more doctors and health workers throughout Africa and the world, embedded themselves not just in the large cities but in the villages and provided day-to-day health care services in addition to addressing tragic events such as the earthquake in Haiti and the Ebola crisis in West Africa.

Cuba has built and maintains factories in Africa developing products pushing for the eradication of malaria. The people of Africa have come to know the greatness of Revolutionary Cuba and Comrade Fidel through the principled development of human relationships based on mutual respect.  No amount of reactionary propaganda against the Cuban Revolution will mute this reality.”

Nii Aryertey Aryeh, Co-ordinator of the “Ghana Loves Fidel” march in a press release before the march said that Fidel Castro is a colossal testament to social achievement and human endeavour to change the lives of the poor.

He said the Cuban revolution led by Commander Fidel “fought for human lives in poor countries and in areas of the world submerged by natural disasters and fought with courage and dignity with respect and kindness”.

According to the release, “Ghana-Cuba friendship began in January 1959 when Osagyefo Dr Kwame Nkrumah became the first head of state to recognise the Cuban revolution.”

It further revealed that “Nkrumah in a secret pact, allowed Che Guevarra and other Cuban internationalists to use Accra as a transit to Congo, to launch a revolutionary intervention in support of forces loyal to Patrice Lumumba."

Nii Ayertey added that: “in July and August 1983, seven hundred (700) Ghanaian students accompanied by seven (7) Ghanaian teachers left Accra for Escbec 22 on the Isle of Youth in Cuba for their secondary education up to the university to specialize in various professions in Medicine, Agriculture, Engineering etc.”

The ashes of the conquerer and liberator, Commadante Fidel Castro, was buried at the Santa Ifigenia Cemetery in Santiago de Cuba on the 4th of December, leaving behind a new society based on the principles of social justice and equality for all of humanity.