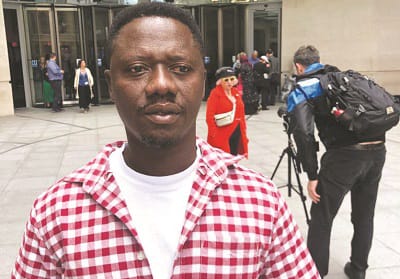 Ghana’s boxing trainer, Lawrence Carl Lokko, has been invited by the World Boxing Organisation (WBO) to participate in its Annual Convention in San Juan, Puerto Rico.

Carl Lokko, a former trainer of former IBF lightweight champion, Richard Commey, will also participate in a seminar for the Association of Boxing Commission (ABC).

The convention is an opportunity to network with the world Boxing Community, create liaisons, and promote the development of professional boxing at the international level throughout the world with the activity strategy tailored as a backdrop to attain this goal.

The Bronx Boxing Gym trainer arrived in Puerto Rica last week for the convention that ends this weekend.

Speaking on the sidelines of the event, he noted that events like the Annual WBO Convention helps grow the “business aspect of boxing,” and Africa should consider similar events for the continent.

“Africa hardly produces world champions; we do it once in a while because the structure here is different from what you have here. For instance, in Ghana, a promoter must put his hand inside his pocket before he can do the show, and in the end, it’s difficult to break even, but they keep doing it because they want to help.

“It is very expensive to put together shows so we need a cushion from all sectors to help the sport.”

Carl Lokko believes the event will improve his knowledge about the sport and its management.

DISCLAIMER: The Views, Comments, Opinions, Contributions and Statements made by Readers and Contributors on this platform do not necessarily represent the views or policy of Multimedia Group Limited.
Tags:
Carl Lokko
WBO Convention