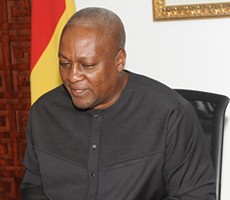 Chief Executive Officer of Golden Future Promotions, Charles Sam says Ghana is in serious crisis because the Mahama-led administration has no clear direction.

According to him, the socio economic situation in the country has grown from bad to worse even as government proclaims a better Ghana.

“There is frustration and a lot of discouragement in the system. People especially the youth sometimes don’t want to believe what the President says”, he bemoaned.

He said the governing National Democratic Congress (NDC) must not be seen to be comfortable in their failures just because others had failed in the past.

The motivational speaker believes that if President John Mahama is candid with Ghanaians on the true state of the economy, he would have a sound mind to find solutions to the problems.

“President Mahama, as a new generational man [hence], must show a clear and active leadership. He must show the way, do the way and go the way. He must be strategic in thinking and comprehensive in approach”.

He stated that President Mahama is a good friend but as  truth be told, things are not going on well in the country.

Charles Sam advised that government must quit the blame game and focus on the bread and butter issues confronting Ghanaians.

"That is why you said you will offer a Better Ghana”, Charles Sam noted, further indicating, “Ghana is in serious problem but it is difficult for government to admit because of the overzealous political rivalry in the country”.

This, notwithstanding, Charles Sam said if President Mahama gathers courage to tell Ghanaians the truth, there would be more time to correct the wrongs and win election 2016.

“Some of us know what is going on but government must be bold and tell the truth otherwise the boat will sink before we get to our destination”, he asserted.