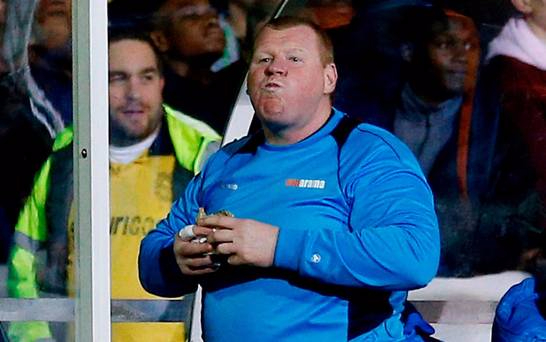 The 45-year-old's offer to leave the club has been accepted, with his manager admitting it is a sad end to the club's magical run in the FA Cup

Sutton United manager Paul Doswell has confirmed goalkeeper Wayne Shaw has resigned after his pie-eating antics during the club's FA Cup fifth round defeat to Arsenal on Monday.

The 45-year-old reserve stopper hit the headlines after being caught on live television eating on the substitutes' bench during the Gunners' 2-0 victory at Gander Green Lane.

The Gambling Comission later confirmed they would be investigating the incident after Shaw admitted he was aware Sun Bets were offering odds of 8-1 that he would eat a pie "live on air".

Shaw dismissed the incident simply as "banter" but has now offered to cancel his contract with Sutton as a result of the impending investigation.

Doswell had already been critical of his actions, claiming he felt that Shaw had portrayed the club in a negative light, and has now revealed the goalkeeper's time at Sutton is over.

"It's been very disappointing, no doubt about that," he told Sky News. "I woke up this morning to this storm of criticism and it's something we have dealt with quickly as a club.

"Wayne has offered his resignation to the chairman this afternoon and its been accepted. It's a very, very sad end to what's been a great story."

Arsenal advanced to the quarter-finals, where they will face another non-league side in Lincoln City, courtesy of goals scored by Lucas Perez and Theo Walcott.

The Gunners have won the FA Cup in two of the past three seasons and can seal a semi-final berth once again by overcoming the first team from outside the Football League to progress to the last eight since 1914.