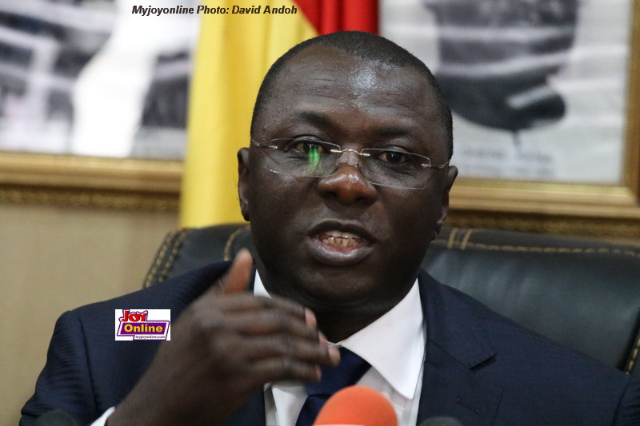 Government has denied claims by the opposition National Democratic Congress (NDC) that it has over the past three years mismanaged the country’s oil revenues.

Deputy Energy Minister, Dr Mohammed Amin Adam in a statement copied to JoyNews said the claims are false as government has rather improved the financial positions of distressed entities in the oil sector.

The NDC at its policy dialogue series on Wednesday accused government of wasting resources insisting it has a far superior record when its tenure is compared to that of the Akufo-Addo government.

According to former Deputy Energy Minister, John Jinapor, the utilisation of revenues especially the Annual Budget Funding Amount (ABFA) and Energy Sector Levy Act (ESLA) proceeds under this administration has been most disappointing.

“For instance, in the 2018 financial year, only 49% of ABFA expenditure was used for capital expenditure whilst 51% was utilized for the supply of goods and services, a clear violation of the Petroleum Revenue Management Act.

“Furthermore, the lack of both transparency and accountability that has characterised the oil sector under President Akuffo-Addo really gives cause for worry.

“The PIAC report of 2017 and 2018 reveals that $655 million out of the total figure transferred to the ABFA which were not utilised cannot be accounted for. In effect $655 million of Ghana’s Petroleum revenues have vanished into thin air,” Mr Jinapor claimed.

But government said these comments demonstrate the NDC’s poor understanding of the Petroleum Revenue Management Act 2011 (Act 815), a law they passed while in office.

The Deputy Energy Minister said there is no requirement anywhere in the law requiring a dedicated allocation of the ABFA to capital expenditure.

“For example, in the year of reference and subsequently, our Government allocated more of the ABFA towards the Free Senior High School Programme. Is that not public investment?

“Due to the fact that part of the expenditure from the allocation to the Free Senior High School programme went to non-capital spending, the NDC misunderstood this to mean a violation of the Law. This is wrong,” Dr Adam stated.

On the NDC’s claim that its management of the Bulk Oil Storage and Transportation Company (BOST) and the Tema Oil Refinery (TOR) were, during their tenure, strategically positioned and made profits, government said that cannot be true.

“The NDC almost collapsed TOR and BOST,” the Deputy Energy Minister said adding, “BOST in January 2017 when the NDC handed over power owed $624 million to suppliers, BDCs and related parties in respect of crude oil imports for processing at TOR and refined products which got lost from BOST tanks.”

As of February 2020, however, Dr Adam said the outstanding amount to settle to clear the books stands at $57 million.

He further stated that an audit on BOST accounts shows that between the periods 2013 to 2016, there was a significant rise in the net losses by the company with the highest net loss of ¢569 million recorded in the year 2016.

“This steady decline in the loss level of the company, from 2017 to 2019, shows that during the year 2020, the company will likely make a profit. BOST under the NPP Government is in a better position.

“BOST continues to pursue its objectives including holding strategic reserves of petroleum products,” he added.

Below is a copy of the statement: