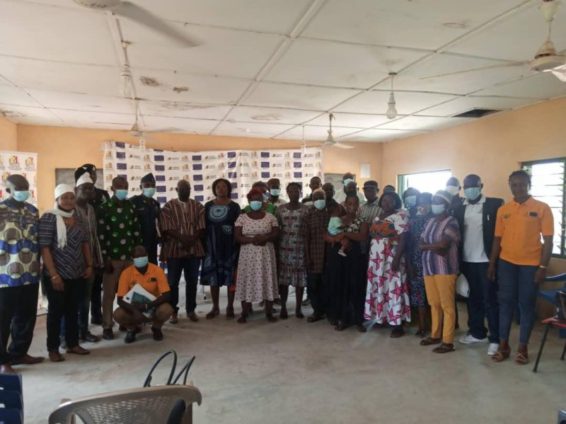 Deputy Superintendent of Police (DSP), Mr James Ackan, the Nadowli-Kaleo District Police Commander, has spelt out some giant strategies by the government to prevent and counter the activities of terrorists and violent extremists.

These include; awareness creation for community surveillance, the deployment of security officers to places likely to be attacked, encouraging the formation of neighbourhood watchdog committees, and the adoption of a community-oriented policing model.

DSP Ackan spelt out the strategies during a meeting with members of the Nadowli-Kaleo District Inter-Party Dialogue Committee (IPDC) organised by the National Commission for Civic Education (NCCE) in Nadowli in the Upper West Region with sponsorship from the European Union (EU).

Facilitating the discussion on the National Security Strategy and the National Framework for Countering Violent Extremism and Terrorism in Ghana, DSP Ackan observed that most violent occurrences were linked to land issues.

According to him, when land ownership was not properly resolved, they could degenerate into violent conflict, thereby encouraging Traditional Authorities to discharge their mandate without fear or favour when such matters were brought before them at the initial stages.

Other causal factors of violence according to the District Police Commander included; inter and intra religious intolerance, unethical political speeches and wrong media reportage.
DSP Ackan also stated that some of the conflicts in the Sub-region were traceable to the quest for control over ownership of mineral resources.

The District Police Commander also encouraged traditional authorities to form community watchdog committees to complement the efforts of the security agencies in the prevention of extreme violence and other crime-related behaviour of persons.

He urged all participants to be on the alert in identifying signs of radicalism, stating that the act of countering extreme violence and terrorism is not a one-day event but a process.

Mr Tambile Der Emmanuel, the Nadowli-Kaleo District Director of NCCE said the meeting was to reignite dialogue among political parties and other stakeholders on the collective responsibility of identifying early warning signals of extremist activities, community surveillance, and the need to put in place effective measures to counter radicalization of the youth.

He highlighted the growing insecurity and the emerging trends of security threats from extremists and the implications of the activities of violent extremists on the stability of the country.

He stated that countries in the West African sub-region such as Nigeria, Niger, Mali, and Burkina Faso have witnessed the negative implications of the activities of terrorists and violent extremists.

According to the NCCE District Director, the activities of violent extremists and terrorists have resulted in the loss of lives and destruction of property in the affected areas.

He said the geographical location of the Nadowli-Kaleo District and the activities of galamsey made the district vulnerable to the influx of people from different places.

Mr. Tambile added that the influx of persons from the West African sub-region should be seen as a security issue and called on all stakeholders to be concerned and perform their respective civic duties towards ensuring peace and security in the Nadowli-Kaleo District and Ghana at large.

He stated that the meeting of the Nadowli-Kaleo IPDC was part of the activities under the European Union (EU) sponsored Preventing Electoral Violence and Providing Security to the Northern Border Regions of Ghana (NORPREVSEC) Project.

Mr Omar Yaarun, the District Director of the Commission on Human Rights and Administrative Justice (CHRAJ), encouraged participants to spread the knowledge and the information received to all in their respective organisations and communities.

Representatives of political parties comprising the New Patriotic Party (NPP), the National Democratic Congress (NDC), and the People’s National Convention (PNC) at the close of the meeting jointly issued a statement expressing their commitment to ensuring peace and security in the district.