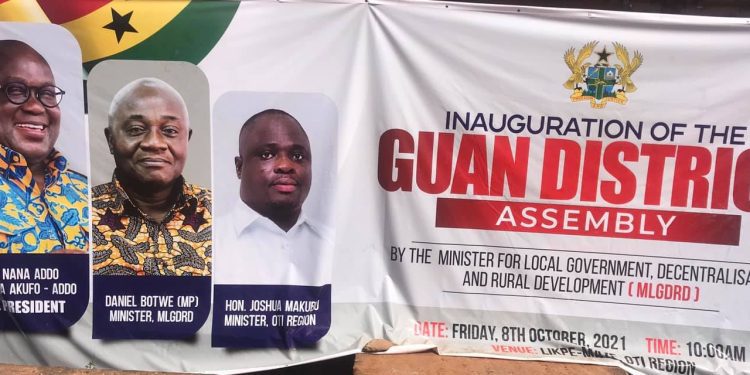 The government has scheduled Friday, October 8, 2021, to inaugurate the Guan District Assembly.

The Guan District comprises areas such as Santrokofi, Akpafu, Likpe, and Lolobi (SALL), and will be inaugurated by the Local Government, Decentralisation, and Rural Development Ministry.

Assembly members in the SALL enclave of the Oti Region are expecting the new district to bring tremendous attention and developmental projects.

The Assembly Member for Santrokofi Gbordome, Philip Kweku Adom praised residents in the district for waiting patiently to have a district assembly.

“Kudos to all of them for the patience they have exercised all this while and the maximum tolerance,” he said.

He was optimistic that development would not be solely focused in Likpe following its choice as the district capital.

“The fact that the district capital is Likpe doesn’t mean everything should be centered there. That, for me, is a major concern.”

The Guan District in the Oti Region was created following a Legislative Instrument laid in Parliament by the Ministry of Local Government and Rural Development in 2019.

The area was previously part of the Hohoe Municipality.

The people of the aforementioned traditional Areas have since 2019 been without an administrative district after the Oti Region was carved out of the Volta Region.

They say the delay in inaugurating the district has retarded development in the area.

Due to this, the eligible voters within areas in Santrokofi, Akpafu, Likpe, and Lolobi were only allowed to take part in the presidential election but could not vote in the parliamentary election since a constituency had not been created for them.

Residents of the Guan District who were not given the opportunity to vote in the parliamentary elections on December 7, 2020, later filed a suit at the Supreme Court demanding, among others, the enforcement of their fundamental human rights to vote.

The Guan District consists of 13 electoral areas and will be the 261st District in Ghana.

DISCLAIMER: The Views, Comments, Opinions, Contributions and Statements made by Readers and Contributors on this platform do not necessarily represent the views or policy of Multimedia Group Limited.
Tags:
Government
Guan District