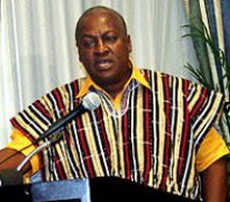 President John Dramani Mahama on Thursday announced that government would in the second term of the National Democratic Congress administration establish regional and district hospitals in all designated capitals which lack such facilities.

President Mahama announced this when he took his turn at the IEA evening encounter to outline his party’s development policies that would be implemented after the December, 2012 general election,

President Mahama said the health sector was crucial towards the elimination of diseases to enhance socio-economic development hence his government’s desire to expand health facilities to stem the high number of deaths from curable diseases.

He said apart from the establishment of hospitals at regional and district capitals, government had also started constructing polyclinics in bigger communities that were not district capitals to reduce the prevalence of diseases in the country.

The President said government had also distributed a total of 161 ambulance vehicles to a number of communities to step up the treatment of emergencies cases that normally result in deaths and called on communities to collaborate with staff of the Ambulance service to reduce the death rate of Ghanaian patients.

President Mahama said supervised deliveries in the country rose from 41.7 per cent in 2009 to 52.2 per cent in 2012 and attributed the feat to the numerous support programmes given out to health sector and attitudinal change due to sustained educational campaigns.

He promised that government would also expand Nursing and Midwifery Training institutions to train more nurses to man expanding health facilities in the country.

The President appealed to health workers to be more proactive in the detection and elimination of both communicable and non-communicable diseases to make Ghana a peaceful and comfortable country.