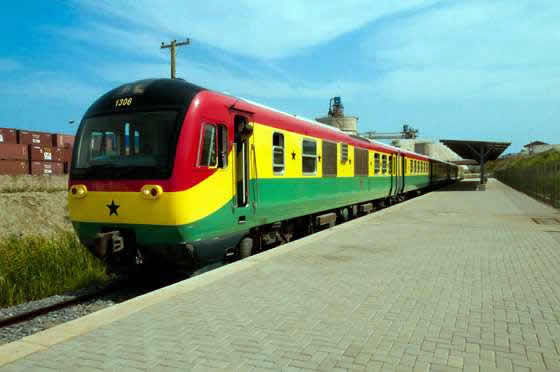 For close to a decade Ghana has been pitching the idea of a state-of-the-art light rail infrastructure for Accra and other major cities to eager investors, however, for one reason or the other, the project has failed to take off – but that is about to change.

The newly created Ministry of Railway Development has been studying a deluge of proposals on the most cost-effective approach to get the project started and completed within the next couple of years.

In an exclusive interview with Myjoyonline.com recently, Minister of Railway Development, Joe Ghartey, said the traffic situation in Accra and Kumasi especially has heightened government's focus on the project.

The inner-city rail project, especially for Accra and Kumasi, is among the top priority rail infrastructure projects of the ministry.

The Accra light rail project is a subsection of the Inner-city Railway Project, which is expected to ease the traffic congestion in Accra and its peripheral communities and improve the city's transit system.

Mr. Ghartey said although the other railway projects are attracting both local and foreign investors, the Inner-city Railway Project seems to be getting most of the investors' attention.

The reason for the increasing interest in the Inner-city railway infrastructure, the Minister says, is because of the associated infrastructure that will come with the project.

The Accra light rail project, for instance, will connect the Central Business District of the capital city to peripheral but fast-growing towns like Kasoa, Tema, Pokuase, and Adenta. The associated infrastructure include a hotel, shopping malls, real estate among others.

Some investors have made major headways, but the Minister will not disclose their names just yet. He disclosed, however, that renowned Architect, Sir David Adjaye and the Ghana Institute of Architects are deeply involved in the Accra light rail project development.

Figures for the possible Build-Operate-Transfer (BOT) module has not been settled on, however, some proposals sighted by Myjoyonline.com for the Accra project put the total cost at $2.5 billion – and include costs for light rail lines, eight light rail carriages, construction, compensations etc.

The project is expected to increase in asset from the initial $2.5 billion to a little over $3.6 billion by the tenth year, registering a growth rate of over 45%, with return on equity estimated to hit 100% and return on investment of 16.83% by the same period.

The Minister is currently in Spain to meet a group of companies and financial institutions on Ghana’s railway development plans.

Mr. Ghartey believes when he arrives on Thursday, a major milestone would have been chalked for the Accra light rail project to start.

But since 2010, the Accra light rail project has been in the pipeline, what is likely to change this time? The Minister says it is the sheer commitment of the Nana Akufo-Addo government to develop the rail sector that will be the game changer.

“The President believes that one of the tragedies of our post-colonial development is the fact that we have ignored the railway, but rail is one the most efficient and cost effective means of transport that you can have. So in order to transform this nation, you have to have rail,” the Minister said.

Aside from reducing congestion and beautifying the cities, the Inner-city Railway Project is expected to bring immense benefits to the country by way of job creation. At least 2,000 jobs will be created in the target cities.

The project also has the capacity to facilitate the emergence of direct and indirect economic activities, leading to improvement in income and standard of living of residents of beneficiary cities.

For the country, the project will boost the productivity of the working population in the cities as it will enable them to get to work with ease and quickly.