Green Economy in the Context of Sustainable Development - MyJoyOnline.com

Green Economy in the Context of Sustainable Development 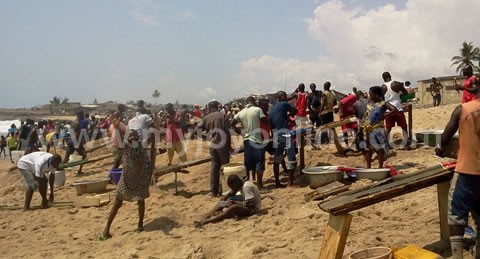 From June 20-22 this year, the United Nations will once again convene a major summit, the United Nations Conference on Sustainable Development, also referred to as RIO+20, in the Brazilian city of Rio de Janeiro to deliberate on the important issue of environment and development. The summit itself will be attended by heads of member states of the United Nations or their accredited representatives. Also in attendance will be representatives from what is referred to as the major groups. Major groups form a big constituency in the UN governance system. They are representatives from business and industry; children and youth; farmers; indigenous people; local authorities; NGOs; the scientific and technological community; women, as well as workers and trade unions. In all over 10,000 people will be participating. This includes representatives from over 800 non-governmental organizations. Aside the main conference of the heads of states, which will be mainly ratification of conference outcomes, protocols and other technical decisions, there will be some 500 side events including exhibitions, meetings, technical presentations and of course expect civil society groups to do one of the things they know best, hold demonstrations.

BACKGROUND
Environment and development issues started gaining global attention in 1972 when the UN organized the first conference on environment and development dubbed, UN Conference on Human Environment (UNCHE) in Stockholm, Sweden. It was the first wake up call for the world to realize that environmental resources are finite and that there is the need to take immediate measures to halt the degradation going on rampantly everywhere.

In 1983, the UN set up an independent body, the World Commission on Environment and Development, headed by Gro Harlem Brundtland, a former Prime Minister of Norway to re-examine the critical environment and development problems on the planet and to formulate realistic programmes to solve them and also ensure that human progress will be sustained through development without bankrupting the resources of future generations. The Commission came out with a report, OUR COMMON FUTURE four years later, which recommended that the time has come for a marriage of economy and ecology, so that governments and their people can take responsibility not just for environmental damage but also for the policies that cause the damage.

In 1992, the UN for the first time held a Summit on the environment, the UN Conference on Environment and Development (UNCED) in the Brazilian city of Rio de Janeiro. It was variously known as Earth Summit and Rio 92 and attracted the largest participation of stakeholders in global development issues. It came out with a report, AGENDA 21, which was described as a blueprint for sound development into the 21st Century. It was at UNCED that the phrase, sustainable development became a working subject for the global community.

In 2002, a review conference was held to evaluate gains made since AGENDA 21 in Johannesburg, South Africa. It came out with the Johannesburg Plan of Implementation with the aim of giving more momentum to the implementation of UNCED outcomes.

SUSTAINABLE DEVELOPMENT AND GREEN ECONOMY
The phrases Sustainable Development and Green Economy are two symbiotic expressions which stress the need to state in economic terms, the cost of environmental neglect, waste and destruction and calls for measures to address them.

The World Commission on Environment and Development defines Sustainable Development as development that meets the needs of the present without compromising the ability of future generations to meet their own needs. What then does sustainable development mean in practice? In the first place we need to understand that there are four life support systems in this world commonly called the four spheres: hydrosphere, lithosphere, biosphere and atmosphere; explained as water bodies, the earth crust including soils, rocks, stones, sand and minerals; living things referred to generally as the flora and fauna (plants and animals), and the skies and beyond. At a minimum, sustainable development must not endanger these life support systems in the pursuit of economic growth and development which obviously involves changes in the physical ecosystem.

There are three dimensions of sustainable development: economic, social and ecological. It means taking measures to ensure that economic, social and ecological values are not compromised today to the detriment of unborn generations. In effect, we are talking about effective protection of the environment from pollution (both water and atmospheric pollution), climate change, depletion of forest and wildlife resources as well as manipulation of landscapes in construction efforts. Sustainable development also means conservation of natural resources for the benefit of communities, i.e., communities must have a share in the benefits to be derived from conservation resources. This must result in the provision of social and infrastructural services to reduce poverty, unemployment, provide better health care services, proper housing, schools and other social interventions which will ensure that benefits gained today will be sustained for future generations to also benefit. Sustainable development also means meeting the basic needs of all and extending to all the opportunity to satisfy their aspirations for a better life through maintaining a stable economic growth, employment and the environment.

The UN Environment Programme (UNEP) defines Green Economy (GE) as one a system of economic activities related to the production, distribution and consumption of goods and services that improves human wellbeing and social equity, while significantly reducing environmental risks and ecological scarcities. It explains this to mean an economy which has developed a low carbon growth path, is resource efficient and socially inclusive. Going further, it says GE is any form of public or private investments that reduces carbon emissions and pollution; which enhances energy and resource efficiency and prevents the loss of biodiversity and ecosystem services. It can further be thought of as an alternative vision for growth and development in people s lives in ways consistent with sustainable development. Investments in the following sectors are indicative of GE attraction: Energy, Forestry, Fisheries, Transport, Agriculture, Water and Sanitation. These are critical sectors that can cause instability in any economy and reverse any gains made whatsoever. It can bring down governments through civil disobedience in the cities and urban areas and also through mortality cases in poor and rural vulnerable communities as a result of resource pollution, depletion and neglect.

WHAT IS NEW?
In many ways, GE objectives are consistent with those already articulated in the broader goal of sustainable development. In fact GE is a means to attaining sustainable development and not a totally new philosophy. Two recent issues emerge: First, there is now a deeper appreciation today by governments, companies, civil society and the public that humanity is reaching its limits, not just in terms of greenhouse gas emissions but also in the use water, land, forests and other natural resources. Secondly, there is the need for new sources of growth that are environmentally sustainable. For instance, adopting low carbon growth path and low carbon lifestyles as a means to achieve GE. Past sustainability efforts have not focused sufficiently on fixing the failures of economic policies on the environment.

CHALLENGES
The principal challenge now is how we move to an economic system that will benefit more people over the long run. Transitioning to a GE will require a fundamental shift in thinking about growth and development, production of goods and services and consumer habits. This transition will happen ultimately through intensive education, sensitization and awareness creation, good governance and changing political thinking of how big decisions are made.

The writer is an environmental journalist and Executive Director of Earth Service an Environmental NGO.