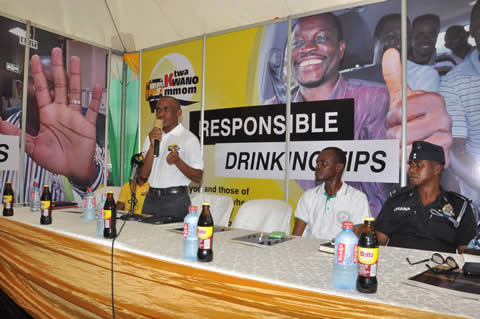 The campaign which follows the pilot project run last year was launched on Monday December 8, 2014 at the Achimota Transport Terminal.

'Twa Kwano Mmom' is an integrated campaign comprising education on the dangers of drunk driving, a voluntary breathalyser testing process for drivers in each participating transport terminal to prevent and discourage drink driving and a scheme to reward drivers who behave responsibly and do not engage in drink driving.

"We are expanding the reach of the Twa Kwano Mmom campaign to directly impact 5,000 commercial drivers across 3 regions in the country.  We are aware that there are many causes of road traffic accidents such as driving whilst tired, our aim with this campaign is to ensure that driving under the influence of alcohol is not one of them”, he said.

He said the road safety campaign was directly in line with Guinness Ghana's commitment to address possible areas of alcohol misuse including drink driving and to foster stronger collaboration among key actors within this space to take action to ensure safety on our roads at all times’.

"It is your responsibility as much as it is mine.  It is therefore truly inspiring to see a company like Guinness Ghana Breweries Ltd, taking a keen interest and such a bold step to curb incidences of drink driving among commercial drivers who transport the majority of our people.  This campaign is highly commendable”, she said.

She also encouraged drivers to undertake regular maintenance of their vehicles and not to drive tired.

The campaign will be activated at eight transport terminals – Achimota, Kaneshie, Tudu, Ashaiman all in the Greater Accra Region, Kejetia and Asafo in the Ashanti Region, and Kotokraba and Tantrie in the Central Region.

As part of the programme, GGBL will be collecting 5,000 pledges from participating commercial drivers who will commit not to engage in drink driving.

Explaining to the drivers the mechanics of the campaign, Ms. Preba Arkaah Greenstreet, Corporate Relations Director, GGBL said ‘drivers will first be taken through our alcohol education programme after which they asked to join the campaign by signing the pledge board committing them not to engage in drink driving.

After which, all drivers who sign up for the campaign will be breathalysed when driving out of the transport terminal to determine the level of alcohol in their body; transport union executives will be on hand to ensure that anyone over the legally permissible blood alcohol limit of 0.08 or more will be replaced by a driver below the permissible limit.

Drivers who behave responsibly throughout the duration of the campaign and do not attempt to or engage in drink driving will be rewarded with branded souvenirs and ultimately free fuel coupons’.

Twa Kwano Mmom is supported by GIZ and Japan Motors who are also sponsoring free health screening for all drivers at participating terminals.

The campaign is also supported by the National Road Safety Commission who is using the platform to educate drivers on general road safety during the festive period.