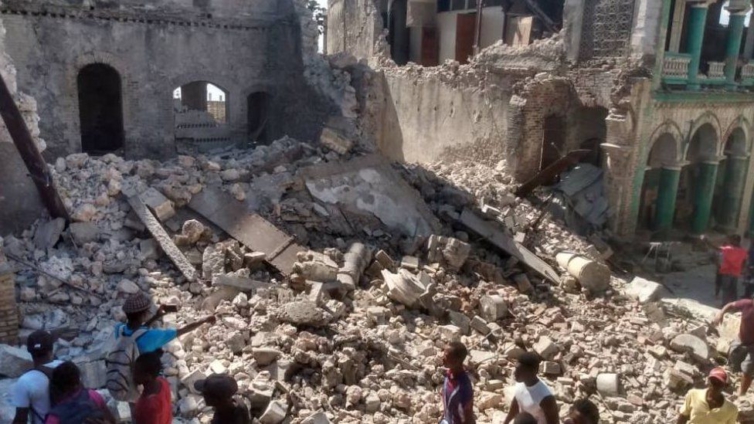 At least 304 people have died and many more are injured

A powerful earthquake has struck the Caribbean nation of Haiti, killing at least 304 people and injuring more than 1,800.

The 7.2-magnitude quake hit the west of the country on Saturday morning, toppling and damaging buildings including churches and hotels.

The prime minister said there was “extensive damage” and declared a month-long state of emergency.

Haiti is still recovering from a devastating 2010 earthquake.

The epicentre of Saturday’s quake was about 12km (7.5 miles) from the town of Saint-Louis du Sud, the US Geological Survey (USGS) said.

The tremor was felt in the densely-populated capital of Port-au-Prince, some 125km away, and in neighbouring countries.

“Lots of homes are destroyed, people are dead and some are at the hospital,” Christella Saint Hilaire, who lives near the epicentre, told AFP news agency.

Prime Minister Ariel Henry said he had mobilised a team to work on the relief effort.

“The most important thing is to recover as many survivors as possible under the rubble,” he said. “We have learned that the local hospitals, in particular that of Les Cayes, are overwhelmed with wounded, fractured people.”

Mr Henry later revealed he had flown in a plane over the city of Cayes.

US President Joe Biden has authorised an “immediate US response” to help Haiti and said USAID would work to support efforts to “assess the damage and assist efforts to recover those who were injured and those who must now rebuild”.

“In what is already a challenging time for the people of Haiti, I am saddened by the devastating earthquake,” he said.

The USGS earlier warned that the earthquake could result in thousands of fatalities and injuries. It also said several aftershocks had been felt in the region, including one measuring 5.8 magnitude.

Frantz Duval, editor-in-chief of Haiti’s Le Nouvelliste newspaper, tweeted that two hotels were among the buildings destroyed in the town of Les Cayes. He said the local hospital was overwhelmed.

Reporters at Le Nouvelliste later said the majority of churches and hotels on the south coast had collapsed or suffered major damage.

Archdeacon Abiade Lozama, head of an Episcopal church in Les Cayes, told the New York Times: “The streets are filled with screaming. People are searching, for loved ones or resources, medical help, water.”

Photos shared on social media showed damaged buildings and piles of rubble after the quake.

Leila Bourahla, Haiti director of Save the Children, told the New York Times it would take days to assess the damage but “it is clear that this is a massive humanitarian emergency”.

Naomi Verneus, a 34-year-old resident of the capital Port-au-Prince, told the Associated Press news agency she was woken up by the earthquake and that her bed was shaking.

“I woke up and didn’t have time to put my shoes on. We lived [through] the 2010 earthquake and all I could do was run. I later remembered my two kids and my mother were still inside. My neighbour went in and told them to get out. We ran to the street,” she said.

The 2010 earthquake in Haiti killed more than 200,000 people and caused extensive damage to infrastructure and the economy.

Saturday’s earthquake comes amid a political crisis in the country, following the assassination of its president last month.

Tennis star Naomi Osaka, who is of Japanese and Haitian descent, tweeted her solidarity with Haiti.

Referring to next week’s Western & Southern Open, the four-time Grand Slam winner wrote: “I’m about to play a tournament this week and I’ll give all the prize money to relief efforts for Haiti. I know our ancestors’ blood is strong we’ll keep rising.”