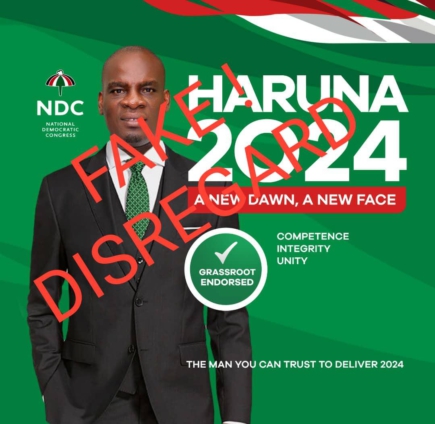 Minority Leader, Haruna Iddrisu, has described as “scandalous and untruth”, posters making rounds on social media announcing his intention to contest the 2024 presidential race on the ticket of the National Democratic Congress.

The artwork depicting the minority leader in a three-piece suit with the inscription: “Haruna 2024. A new dawn, A new face” also described him as “competent with integrity and the man the party can trust to deliver victory in 2024.”

But the minority leader who is also a member of parliament for Tamale South says the poster is fake and must be disregarded.

In a text message to JoyNews, he said, “My tomorrow, my political future, is in the hands of God. I am young enough to wait for God’s time. I have never worn a three piece suit black in a green tie”.

The NDC lost the December 2020 presidential elections but sought redress at the Supreme Court over claims of flawed results but the court in a 7-0 decision dismissed the petition saying it lacked merit.