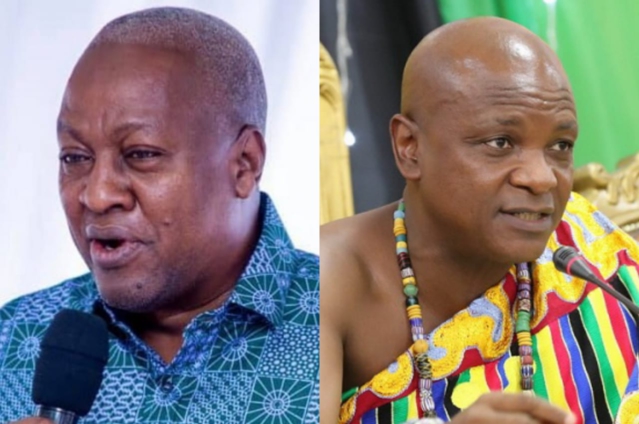 Former President John Dramani Mahama has praised the Agbogbomefia of the Asogli State, president of Asogli Traditional Area, for his courage in speaking truth to power.

According to him, Togbe Afede XIV speaks the truth regardless of who is involved.

Speaking at the 2022 edition of the Asogli Yam Festival, Mr Mahama, lauded the boldness of the traditional ruler in commenting on relevant national issues.

He said the chief’s posture is commendable and must be emulated by all.

“As people in authority and leadership, we must not massage the truth. But we must be bold always and fearless in speaking the truth and I must say one traditional leader who has always spoken the truth no matter who is hurt by the truth is Togbe Afede the fourteenth”, Mr Mahama said.

“Togbe you’re a man of principle, you’re a man of conviction and we all admire you for that. And so don’t change, just continue being yourself”, the former President emphasised.

Mr Mahama added that Togbe Afede’s earlier decision to return a gratuity which he felt he did not deserve deserves plaudits and not insults.

It will be recalled that the Paramount Chief and Agbogbomefia of Asogli, Togbe Afede XIV, became the toast of many Ghanaians for rejecting over ¢365,000 ex-gratia paid to him for serving on the Council of State between 2017 and 2020.

Consequently, he was praised for protecting the public purse and thinking about the growth and development of the country.

But amidst the praises, a section of the populace accused the traditional ruler of being political in his gesture.

But addressing a gathering of chiefs and people in the Volta Region over the weekend, he stressed that this should not have been the case.

“When a traditional ruler and a former of the Council of State returns a gratuity that was paid to him because he thinks it was not necessary and he didn’t deserve to have that money paid to him, he should receive acknowledgements and gratitude and not insults”, Mahama stressed.