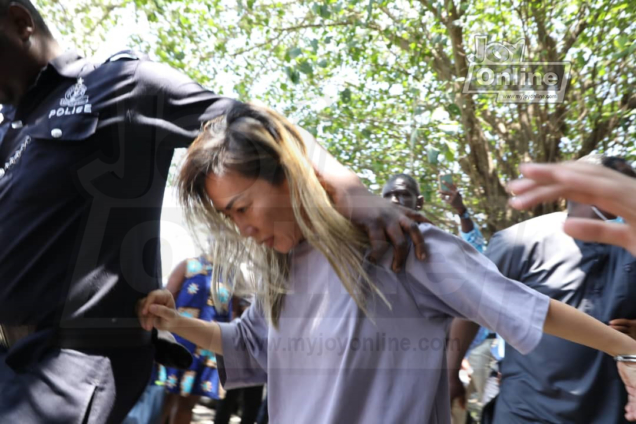 The Attorney-General has been ordered by an Accra High Court to submit the full complement of the evidence it intends to rely on for the prosecution of ‘kingpin’, Aisha Huang.

The Chinese lady is standing trial for her alleged role in illegal mining activities in the Ashanti Region.

The A-G on October 11, this year told the court it was ready for the trial and will disclose all evidence to be used.

It, however, emerged in court today that the documents had not been submitted.

Deputy AttorneyGeneral, Alfred Tuah Yeboah, told the court his officers were at the registry filing the documents.

This explanation did not sit well with the lawyer for Aisha Huang, Nkrabeah Effah Dartey.

“At the last date, the AG said he was ready. Now we are here. And they are saying they are not ready. Please, I want to repeat my application the other time. Grant us bail,” he said.

Justice Lydia Marfo responded that the circumstances that led her to decline the request for bail had not changed.

She also took notice of the fact that the Chinese Interpreter needed for proceedings was also absent.

She, therefore, adjourned proceedings to November 2, 2022, directing the Attorney General to ensure that the documents are made available to enable case management and pre-trial conference to take place.

Deputy AG Alfred Tuah Yeboah told pressmen the delay was only a result of his office being diligent.

“We have complied but it wasn’t within time. As we speak, it has been done. Prosecuting a case like what we have at the moment, you need to dot the “I’s” cross the T’s. At the next adjourned date we will definitely be ready to move on,“ he stated.

Aisha Huang is accused of being heavily involved in Galamsey activities.

She was arrested and charged in 2017 but left the country after she was repatriated.

She is accused of sneaking into the country to continue with her illegal activities. She has at all times pleaded not guilty to the charges levelled against her.

DISCLAIMER: The Views, Comments, Opinions, Contributions and Statements made by Readers and Contributors on this platform do not necessarily represent the views or policy of Multimedia Group Limited.
Tags:
Accra High Court
Aisha Huang Ghana
Nkrabeah Effah Dartey