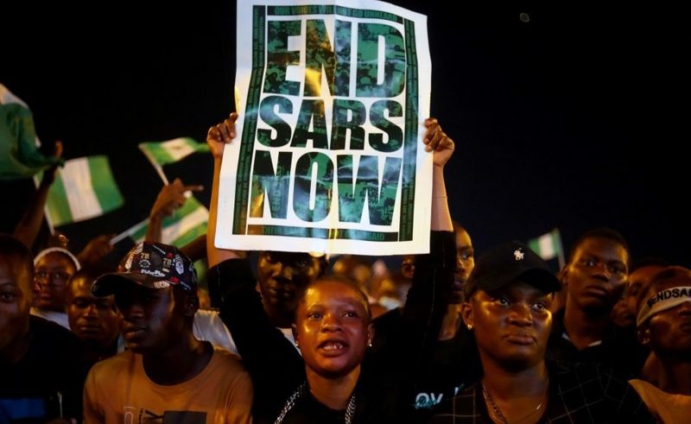 America’s 2016 Democratic nominee, Hillary Clinton has added her voice to others calling for an end to police brutality in Nigeria using the hashtags #EndSARS #StopNigeriaGovernment.

In her tweet, which has been shared by over 180,000 Twitter users, she has called on the Nigerian president, Muhammadu Buhari and the Nigerian army to stop killing young protesters.

Also tweeting to show solidarity is Barbadian singer, Rihanna who tweeted a photo of a bloodied Nigerian flag and a message on Tuesday which reads:

“I can’t bare to see this torture and brutalization that is continuing to affect nations across our planet! It’s such a betrayal to the citizens, the very people put in place to protect are the ones we are most afraid of being murdered by! My heart is broken for Nigeria man!! It is unbearable to watch! I’m so proud of your strength and not letting up on the fight for what is right! #ENDSARS”.

These follow videos on social media that show Nigerian soldiers opening fire on unarmed protesters at a protest site in the Lekki district of Lagos on Tuesday.

Several demonstrators were killed protesting against police brutality and many others injured.

Street lights has been restored after the deed is done… shooting goes on!!! I don’t think online protesters should be sleeping this night please retweet all trending hashtags please!!!#LekkiMassacre #EndSARS #EndPoliceBrutalityinNigeraNOW pic.twitter.com/CeynNH3dhW

One witness said that soldiers “started firing ammunition toward the crowd.”

Thousands of demonstrators, many of them young people, have taken to the streets of major cities in Nigeria to call for an end to the Special Anti-Robbery Squad (SARS).

The squad was disbanded in early October, however, following an announcement shortly after was the creation of a new police unit, Special Weapons and Tactics (SWAT), the protests continued.

Protesters say the reason for their march has not been addressed by the Nigerian government and until the government acts they will remain on the streets.

But as the country’s economy continues to suffer from the ongoing demonstrations which have led to major roadblocks etc., the Nigerian government has resorted to guerrilla tactics to get demonstrators off the streets leading to more violent acts against demonstrators.

The death toll is not yet known.

A 24-hour curfew is being put in place for Lagos, the BBC reports.

Nigeria’s most populous city is home to approximately 20 million residents.

DISCLAIMER: The Views, Comments, Opinions, Contributions and Statements made by Readers and Contributors on this platform do not necessarily represent the views or policy of Multimedia Group Limited.
Tags:
#EndSARS
#EndSARSNow
Hillary Clinton
Lekki Massacre
Lekki Toll gate
Rihanna