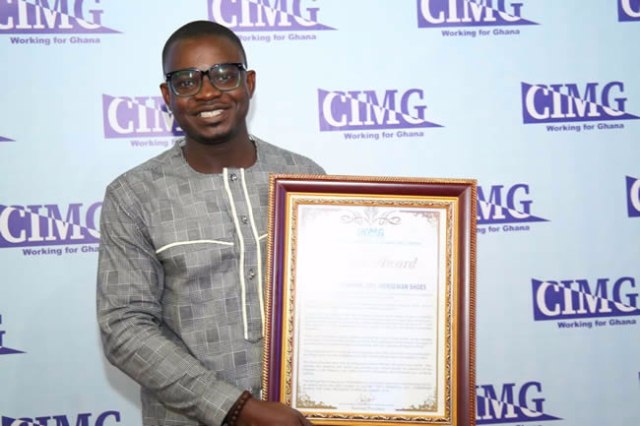 The CEO of Horseman Shoes, Tonyi Senayah has been awarded the CIMG President's Special Award at the 2015 CIMG Marketing Performance award held Accra.

The Horseman Shoes, manufacturers of male footwear for the past six years was praised for daring "to overcome the fear of failure, knowing what it takes to be a successful African entrepreneur", part of his citation read.

The citation noted that "in 2010, realising the high demand for quality shoes amongst Ghanaian youth you put together a team of cobblers with whom you established a kingdom."

This bold initiative and dedication paid off a year after starting your business when you were awarded the Global Achiever's Award in 2011 and also awarded for your outstanding product Quality in 2013 by the African leadership Magazine".

The company in 2014 got a major endorsement from President John Dramani Mahama during his State of the Nation's where he mentioned the brand as part of his encouragement to buy made in Ghana goods.

Displaying a pair of Horseman Shoes, President Mahama said they were "comfortable and can compete with any shoe brand around the world".

Horseman shoes has grown over the years increasing its client base, opening its main shoe outlet and in has partnered other outlets in the capital to retail his shoes.

With the increasing demand from all segments of the market, the company will be launching it's female shoe collections on 21st October 2016 at the African Regent Hotel.

The CIMG is the foremost marketing organisation in Ghana and it's CIMG awards is an important calendar event for the marketing industry in Ghana.

Other award winners at the 27th CIMG awards were Mr Jesse Amoah Agyepong of Tigo who shared the Marketing Practitioner of the year with Ms Shirley Acquah Harrison of Graphic Communication Group.

Marketing man of the year award went to Patrick Akpe Kwame Akorli, MD of GOIL. While Ms Elizabeth Akrutu, MD of Unilever Ghana won the Marketing Woman of the year.