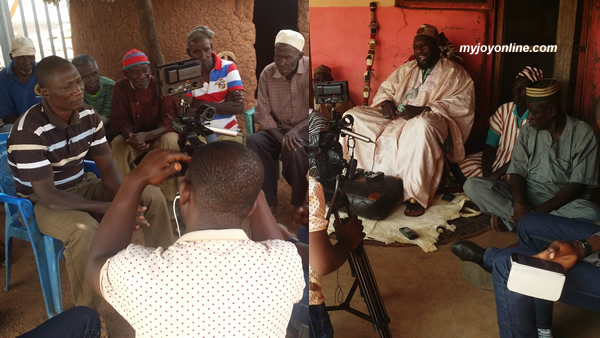 Two families from the same clan are fighting to either take over or remain on it in a region where the greatest enemy is 69% poverty rate.

“When the right person is sitting on the skin I am telling you Bunkprugu will be peaceful more than anything…they are jealous of my regime. They want to spoil my regime and those doing it they know…” spokesperson of the Jamon gate said.

Despite the low income levels in this part of Ghana, it is much easier to raise funds to buy expensive and sophisticated guns to kill their opponent.

“It is not like the guns I have heard before. It was like a drum…something kukuku…so I asked, ahh what is happening? Is it an accident or what? It was like some machines they set up and the machines were firing)

Killing each other to takeover or remain on the throne appears normal now. Over 200 Bunkprugu residents including children are now UN recognized refugees in Togo. They crossed Ghana’s border to Togo to seek refuge.

The factions are children of two brothers. The younger one is contesting his older brother, the present Chief of Bunkprugu. This has continued for almost nine years. Both have taken entrenched positions and are reluctant to meet each other. The Bunkprugu chief who doubles as the leader of the Jafouk gate Naa Alhaji Abuba Nasinmong and his people are not ready and willing to relinquish the skin for the Jamong gate to take over.

The Bunkprugu chief and leader of the Jafouk gate Naa Alhaji Abuba Nasinmong states his position:

“I believe so much in this and it is the reason I don’t want to do any bad thing. I know I will be judged one day. You can hide things but not from God. You want to spoil my regime, how do you think yours will be when your time comes? How would you want yours?”

The Jamon gate is also determined to rule Bunkprugu. They believe they are entitled to the skin and will go every length to disskin the sitting chief.  Elisha Naau who spoke for the Jamon gate stated:

“All the problem we are facing is from the Nayiri.  He is causing all these problems. What Nayiri has done is this…anyone who settles first at a place automatically becomes the king of that place.

“My grandfather was the first to settle here. If you are having a house and a stranger comes to you and offer him your house to live in, can he later come and tell you he is the owner of the house?”

So this misunderstanding has turned Bunkprugu upside down. Now they see one another as enemy who must die. Blame game in the area is rife as each gate accuses the other of trying to eliminate all their people.

In November last year, the conflict intensified. The death of two young men from one of the gates was the trigger. DCE Timothy Sampoa Laari explained;

“The first one, a teacher was killed. Then the second one that took place around 12th May, two people were also killed”.

“Then this current one, one person was killed during the fight but you know, some two people were murdered by unknown people and that brought about the current crisis”

The two gates capitalized on the situation and launched their weapons. The Bunkprugu-Yunyoo district Police Commander Superintendent Stephen Delaport said he experienced the shock of his life as police officer for the first time.

“It was like a war or a movie. They were shooting from all corners. You couldn’t locate who is shooting from where. They were even shooting towards the police station where some people were taking cover. So it was as if the police and the chief’s palace where their target.  We had to do all we could to protect those who ran to us for safety as well as our properties and the armory”.

“This meant we had to also fire back to push them away and to let them know they are not safe so they should not come. So it was like a move. That night, I did not even know where to take cover…whether to dig a hole and enter it or…then I looked the people who were taking cover at the police station and I said to myself, what happen to those people should we leave them”

A huge dilemma for a law-enforcement officer. So he held on to his weapon and kept firing to push the combatants back and to also protect their armory. The fighters were highly armed that they could have overpowered the police.

Superintendent Delaport managed to call his regional commander for reinforcement. Not even the presence of the police and military reinforcement helped in disarming the fighters.

“They don’t fight from their homes. They hide somewhere and fire. You cannot trace that the firing is from this home or from this compound so after that, even men from Accra, that is the SWAT from Accra and then the FPU, all came around and they did house search for weapons and they could not even retrieve a barrel of weapon. We don’t know where they hide them; whether in their farms or wherever they hide them”

Three more people were killed only last week in another sporadic shooting between the gates.

When the factions are in their elements, not even innocent trees providing them oxygen are spared. The trees have been riddled with bullets. Houses of relatives turned enemies have been razed . The Bunkprugu district chief executive Timothy has a fair idea of the number of houses that have been burnt.

“It is just this current one that many houses were not burnt. But for the 12th May one, over 40 houses were burnt and many properties destroyed. You know, most of the houses here are thatched houses and as soon as they put fire in them, anything in them will be burnt”.

“A lot of properties got destroyed apart from the lives that were destroyed and for more than a month, nothing went on in the district; businesses, education, doctors going to work, all the workers…people even ran away and it took time before they came back”

Because of the conflict, many of these mud houses have been fortified so bullets are unable to penetrate them to kill an occupant. Still, the extent of destruction in this border town is huge.

The people lead me to a spot a 70 year old man was shot and killed in November last year. He was physically challenged and was fleeing his home for safety when he heard serious gun shots behind his house. Unfortunately he met his killers a few meters away…he was shot in the chest.

A stone has been put here to cover his blood.

Development has eluded the town. Education is grinding to a halt. Outgoing Interior Minister Mark Woyongo has made several trips to Bunkprugu Yunyoo to speak to the factions about burying their weapons.

But those visits yielded no fruits. Mark Woyongo says the people of Bunkprugu are fast losing the respect others had for them.

Respect may not be the only thing they are losing. Bunkprugu Yunyoo has been rendered stagnant. Development has come to a standstill here because of the disturbances. The District Chief Executive Timothy Sampoa Laari is particularly sad about how development in Bunkprugu has seriously affected education.

I can tell you, it is about two weeks now and nothing is actually going on. The only senior high school in the district capital was closed down not that the teachers asked them to leave. They left because they feared for their lives. It was the headmaster who had to send information around encouraging everybody to come back because it wasn’t everybody who was affected.

Students of Bunkprugu Secondary Technical School have been severely affected. I travel there to spend time with them.

The school is the first structure you see when you enter the Bunkprugu township. Unfortunately it is not walled so any stray bullet finds its way here when fighting resumes.

The 19-year old Peace Namman Laar is the Assistant Girl’s Prefect in this school. She is in her final year and has high hopes of making it to the University to study journalism. But she fears the insecurity in Bunkprugu Yunyo may thwart her dreams.

This is the road we are talking about and as you can see, it is in a deplorable state so anytime there is confusion in Bunkprugu and security personnel have to go there, it takes them hours to get there and deal with the situation. So this is the road and it tells the cost of conflict)

Some time ago, those who fled to Togo were encouraged to come back. But a sad story of a returnee, Kennedy is a huge disincentive to return.  Kennedy who had a building here was killed when he returned from Togo. His house was also destroyed. He came back because they were told to start building the peace but he came back just to be killed together with his brother.

There is an 8pm to 6am curfew in Bunkprugu to halt the atrocities which usually occur in the evenings. But it appears the curfew has not done much as the factions still attack each other even during the curfew period. Now, the two gates don’t trust each other. They have fears of getting attacked or getting killed any moment.

For almost nine years, the Bunkprugu Chieftaincy issue has been in court and both the Jamong and the Jafouk gates have been waiting all this while for an outcome both believe will favour them.

The Bunkprugu Chief Naa Alhaji Abuba Nasinmong says government must ensure a speedy trial of the matter to bring peace to Bunkprugu.

My President and Chief Justice, how why must this issue be in court for 8 years seven months? Now the disturbances here have resurrected. I am pleading with the President and Chief Justice to use their powers and show that they are the leaders of Ghana. I am pleading with them to give the court 10 working days to sit on the Bunkprugu issue and pronounce judgment.

I am telling you, they would be able to finish the case even before the 10 working days. Immediately the case is over, Bunkprugu will see peace again. I am ready to quit if the court rules that I am not the chief of Bunkprugu and I am sure they are also ready for that. I am ready for the sake of peace and I believe if they lose the case they are ready to bring me home for us to sit together and talk

The Jafouk gate equally awaits the court ruling. Their spokesperson Elijah Naah says they will also accept the outcome only under some conditions.

SETH KWAME BOATENG: so you believe in the court and you earlier said you are ready to comply with whatever the court will say, but you are now telling me if it goes against you, you are going to file an appeal?

Yes, I am saying that because there is a problem here that is why the case is delaying but I don’t want to mention it because the last time I mentioned it when the Interior Minister came here, I found myself in trouble.

It is often said that, war is expensive and peace is priceless. It is unclear if the “brothers at war” are indeed willing to give peace a chance. But at least for the sake of strangers, students and innocent children in Bunkprugu, can all these sophisticated weapons be buried for dialogue to reign?

This has been Seth Kwame Boateng.