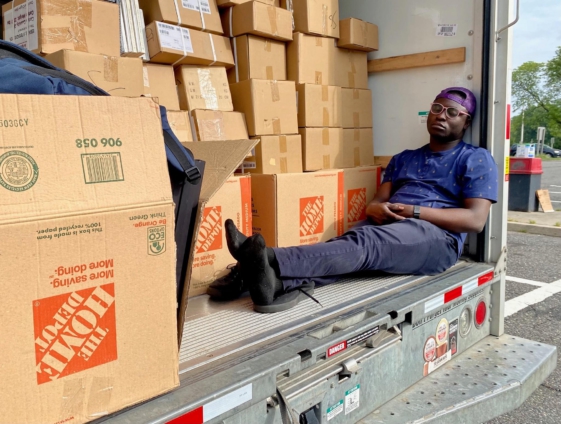 Photoblog, Humans of New York (HONY) has raised over $1 million for Ghanaian photographer, Paul Ninson to build a photography learning centre in Ghana.

The project which has been named, Dikan to wit, ‘Take the lead’ will provide a rich resource for Ghanaian and African photographers and the general public to access a wealth of knowledge on photography from and about the continent.

The library will be filled with over 30,000 books on photography Paul Ninson had collected during his one-year stay in New York studying at the International Centre of Photography, New York.

It will be the biggest photo library in Africa.

According to Ninson, he had got help from friends and sometimes total strangers collecting books for his project.

He said, “I began to speak with booksellers about my vision, and many of them became eager to help. They’d give me discounts. They’d tell their friends about me.

“I started getting calls from galleries and private collectors, asking if they could make a donation. Sometimes it was hundreds of books at a time. Sometimes thousands.”

“I filled up my entire apartment with books, then I rented a storage unit. Then another. Then another. I’ve collected 30,000 books so far. Enough to build the largest photo library in Africa. The books are currently in a shipping container en route to Ghana,” he added.

Dikan he says will be “more than just a library. I want to build an entire learning centre. A home for photography in Ghana.”

“There will never be another Paul Ninson who has to leave home, and feel this way, just to learn how to tell stories. Everyone will be welcome at Dikan. There will never be someone standing at the gate. No person will be too poor, or too inexperienced, to learn how to photograph. Even young kids will be welcome. There will be a room just for them. Where they can learn to photograph. And look at National Geographic magazines,” he said.

Persons interested in supporting his dream are encouraged to do so by contributing to his crowdfunding account.  https://bit.ly/letshelppaul

DISCLAIMER: The Views, Comments, Opinions, Contributions and Statements made by Readers and Contributors on this platform do not necessarily represent the views or policy of Multimedia Group Limited.
Tags:
Dikan Centre
Humans of New York
Paul Ninson
Photography