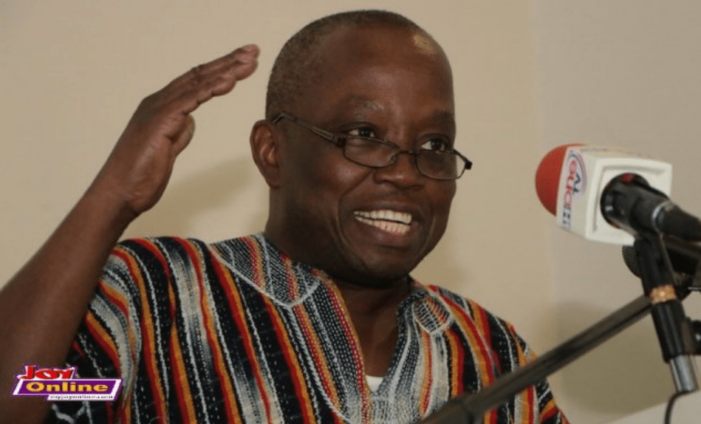 Despite the controversy surrounding his tenure and his bizarre exit, Daniel Domelevo has no regrets about leaving a better-paying job to serve as Auditor General.

For him, the chance to serve the motherland is one he would not pass by merely for higher pecuniary value elsewhere.

Ghana had invested in his upbringing and it was time to return the favour, Mr Domelevo believes.

“I left the better paying job but I could not have gotten that better paying job without what the country Ghana gave to me so I thought it was time to also give back to my country,” Mr. Domelevo told JoyNews’ Upfront host Raymond Acquah on Wednesday.

According to the celebrated anti-corruption fighter, his abrupt exit from office takes nothing from his resolve to serve the country which made him.

His comments come a year after his exit as Auditor General. Before his official exit, Mr. Domelevo was directed by the President to proceed on leave under novel and most bizarre circumstances.

Critics of the government linked the directive to fallouts from Domelevo’s resolve to fight suspected improprieties involving close associates of the President, including then Senior Minister Yaw Osafo-Maafo.

Not long after he was asked to step aside, Domelevo’s replacement cleared Osafo-Maafo of wrongdoing in the Kroll Associates $1million controversy.

Mr. Domelevo was investigating the payment for no work done in the Kroll hullabaloo.

Almost a year after his apparent removal, Domelevo remains thankful for the opportunity to serve the country.

He is rather grateful he left at the time he did telling the host Raymond Acquah that his removal was “timely” as the working environment at the time became “toxic.”

The Former Auditor General has fought the current assets declaration regime since he took the reins in 2016.

Speaking once again on the issue on Wednesday, Domelevo outlined steps that were set in motion to bring a semblance of modernization to the process.

“Before leaving office, we had started the process of automating the declaration process whereby we develop software by which people would just go online and do the declaration…I actually called on a team from the World Bank to come and do quality assurance of what we have delivered and they actually marked it clean, but we were not able to operationalize that before I left office and the rest is history,” he stressed.

DISCLAIMER: The Views, Comments, Opinions, Contributions and Statements made by Readers and Contributors on this platform do not necessarily represent the views or policy of Multimedia Group Limited.
Tags:
Daniel Domelevo
Former Auditor General
Regrets