'I saw the best of Kotoko against Medeama' - Prosper Narteh - MyJoyOnline.com

‘I saw the best of Kotoko against Medeama’ – Prosper Narteh 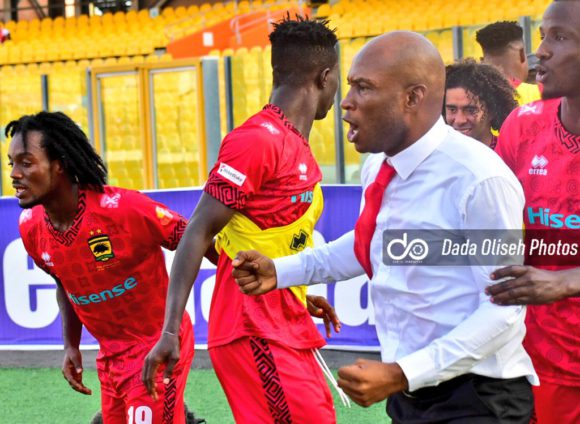 Head coach of Asante Kotoko, Prosper Ogum Narteh has expressed his satisfaction with his team’s performance in the win over Medeama over the weekend.

The Porcupine Warriors beat the Mauve and Yellow lads on Sunday, January 23, in their Ghana Premier League matchday 14 fixture at the Baba Yara Stadium, with Georges Mfegue scoring the only goal of the game.

Speaking after the game, the Kotoko gaffer said his side were the better team on the day and played well, describing their performance as a fantastic one.

Aked about his team display, Ogum Narteh said, “Fantastic. I think I saw the best of my team today. We were very patient on the ball, we saw a lot of the ball, we made intelligent decisions on the ball, we created a lot of spaces on the field of play and we utilised those spaces. I’m impressed.”

The win on Sunday sees Kotoko extended their lead at the top of the league table with a game in hand against Hearts of Oak still to come.