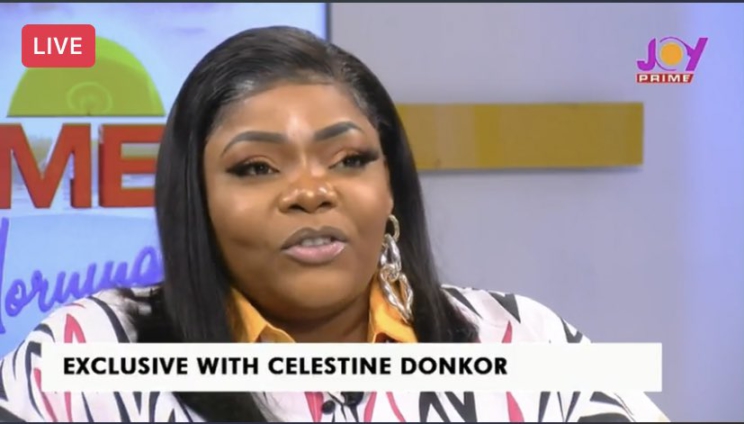 Gospel musician, Celestine Donkor has disclosed that she sold charcoal, porridge, beans and other foodstuffs to finance her education.

Selling on the street was a better alternative to survive the harsh economic challenges since her parents were not financially stable enough to cater for the whole family.

In an interview with Roselyn Felli on Prime Morning, the ‘Agbebolo’ hitmaker recounted that “at a point, we had to survive by ourselves at a very young age; you have to think of paying your fees.”

“So, when you come back from school, you need to think of what to sell and how to raise money for the following morning. I’ve sold corn, charcoal, ‘kookoo’ (porridge),” she recalled on Wednesday, November 2.

Over the period, Celestine Donkor said she used to wonder why her parents were alive but could not provide her basic needs.

“As a young girl, one of the prayers I constantly prayed and asked God was, ‘Why didn’t you bless my parents to take care of me? It was a prayer I always prayed in a deep place.

“I don’t understand why my parents are alive and I have to still be like an orphan in someone’s house. It is different when your parents are dead,” the celebrated singer explained.

According to Celestine Donkor, she was encouraged by her husband to start producing her own songs after many years of being a backing vocalist.

She recounted a situation where her first breakthrough song ‘Supernatural’ was rejected by the church she fellowshipped with.

“…these were declarations by Dr Mensah Otabil. Every year, he releases a theme for the year, and it comes to declarations. So, it was in this year that I was praying with the declaration and I got my breakthrough.

I decided that I’d put it in a song as a gift to the church. I did not intend to release it to the public. I took it to the church, and some way, somehow, it wasn’t accepted. So somebody advised me to take it out and do a video,” she narrated.

The musician has released a new song and is set to drop an album between now and early 2023.

DISCLAIMER: The Views, Comments, Opinions, Contributions and Statements made by Readers and Contributors on this platform do not necessarily represent the views or policy of Multimedia Group Limited.
Tags:
Celestine Donkor
Gospel Music
Prime Morning