I went to a brothel with my boyfriend. It was nothing like what I expected - MyJoyOnline.com

I went to a brothel with my boyfriend. It was nothing like what I expected 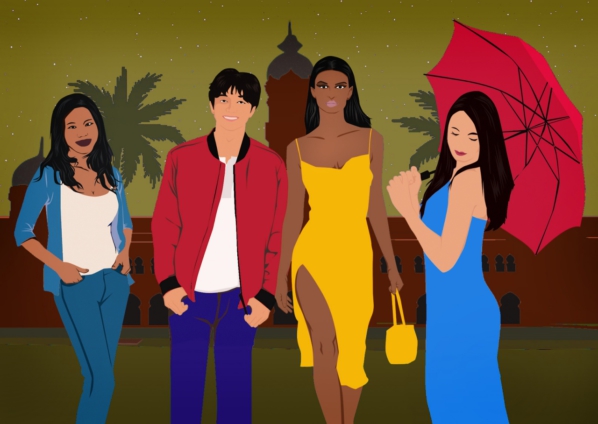 My boyfriend, Rod, is passionately kissing another woman.

Little fingers of jealousy squeeze my insides, and I’m not sure where to look or what to do. The woman senses my discomfort and immediately stops, pulling me up beside her with a big, warm giggle and a squeeze. I relax and remember: This is why I chose her. I like her, I love that giggle, and I know she has absolutely zero interest in poaching my boyfriend.

I’d never had a “real” threesome before, other than some fairly benign fooling around in college. It had been a lifelong fantasy, but the emotional politics of threesomes always seemed so forbiddingly complicated. Surely someone would get hurt, someone would feel left out, someone would get jealous ― surely, maybe, definitely me? Plus that third-wheel ― would she turn stalker? Would we get an STI? Would an angry boyfriend show up out of nowhere and make us the unfortunate stars of a true-crime show? Just too risky. So I had resigned myself to the fact that some things are best left to fantasy.

When I met a lover who knew his way around a paid hookup, however, a whole new possibility presented itself. Rod and I headed to the brothel outside Reno, Nevada, to celebrate my upcoming birthday. And it was not at all what I expected.

We took a cab from our hotel in downtown Reno to the brothel’s bar, all flashy neon outside but classic sticky floors and bare-bones Old West saloon inside. Escorts chatted among themselves on bar stools or lounged on velvet banquettes against the wall. It was early ― around 4 p.m. ― and we were some of the only patrons. A few old men sat at wooden bar tables, eating out of plastic foam TV trays and silently sipping beer. Women who obviously knew them would pop by periodically to pick them up, a scene much more akin to medical assistants ushering patients to the exam room than participants embarking on a sexy encounter.

Rod and I were the subject of great interest ― couples are a fairly rare event ― and we had many friendly women cruise by our table, asking if we had any questions and offering to show us around. Before we had a chance to chat with anyone in detail, the “lineup” bell rang, and every patron who had not already initiated an encounter with a woman went through a forbidding dungeon-like door into a cavernous hunting lodge space.

In front of a giant stone fireplace the women lined up. They were every kind of everything ― all different races and body types and styles of dress. I found myself in a rare moment of simply admiring the beautiful diversity of their bodies without that knee-jerk need to compete or compare myself. I winced a bit self-consciously, however, when I realized that none of them were as old as I was. Would they be turned off by our middle-aged bodies? Wait, was I actually expecting them to be turned on? I was momentarily stumped.

The house manager ― a business-suited woman who was my age ― introduced each woman, who then stepped forward for a moment, gave a little wave and a smile, just like at a beauty pageant. A handsome young guy in the chair beside us made his pick immediately. His woman grinned and sashayed over to sit on his lap and gave him an enthusiastic greeting ― this was clearly not their first time together. The manager then asked any women who wanted to entertain couples to step forward, and about half of the line did.

Rod and I had made an agreement before we arrived: I got to choose. I already knew that I wanted Carmen, the curvy, dark-haired woman in a fishnet dress and thong who had been the first to say hello to us in the bar. She was flirty and seemed happy. She was pretty and she had that giggle. So I pointed at her, while my nice-girl upbringing screamed at me silently: Pointing is so rude! The women without dates headed back to the bar and I felt another guilty stab as they filed past us. Had I made them feel rejected? Did they take it personally?

I didn’t have time to think about it because Carmen was shimmying on our lap, or, more specifically, on my lap as I sat on Rod’s lap. Pulling me up by the hand, and looping an arm around him, she led us to the negotiation room. It was a small room with dim lighting that resembled a hall closet and was just big enough for us all to sit knee to knee while we discussed what our hour might look like and what the price tag would be.

Depending on what services we wanted, our time with Carmen could easily total a thousand dollars or more. She laid out her ground rules (condoms were always required; kissing was OK) and asked if we had any specific requests. Not really, we just want to have fun, we told her. We negotiated a price ― I gulped and Rod agreed. Then we offered up our genitals for inspection, a quick once-over she conducted with a sly sense of humor while she detailed the rigorous STI testing she undergoes every week. Oddly, the whole thing was reassuring and funny rather than awkward. STIs are taken very seriously at the brothel, which is obviously a good thing.

The unusual formalities over, we headed to the pay window and forked over the cash. Once we were finished, we followed Carmen down a maze-like hallway — a literal red light glowed everywhere ― and she pranced along ahead of us with a Champagne bottle in an ice bucket.

When we finally got to her room, a tiny, semi-personalized space, I was thrilled to find it was toasty ― I’m always freezing when I’m nervous. Carmen pointed out condoms, towels, the fresh sheets on the bed, and the adjoining bathroom (which she shared with the woman in the room next door). The little tour was a strange combination of straight commerce and flirtation.

Carmen seemed to be a naturally touchy-feely person and she held my arm or tapped my back as she showed us around. I noticed that she focused her attention much more on me than Rod, which charmed me, but the cynical observer in me noted that it is an undoubtedly smart, practiced move — she is obviously well-versed in disarming the female competition and jealousy aspect of these encounters.

Things flowed effortlessly between Carmen and me, from our intro chatter to getting into the horizontal action, and within minutes Rod enthusiastically joined in, the three of us rotating around in a surprisingly fluid give-and-take. While he nominally took charge ― after all, a threesome needs a little direction ― it was overwhelmingly female-centered sex. I smiled to myself. Threesomes are such trite male-fantasy territory, but Carmen and I were a girl party of teamwork, exploration and celebration. I even joked at one point that we hoped Rod didn’t feel excluded. (He decidedly did not.) The whole experience was fun and sexy ― all I had hoped it would be ― with none of the awkwardness I had feared.

Carmen was unfailingly charming and enthusiastic, but I never once mistook her warmth for actual sexual excitement. There was no pretense on anyone’s part that this encounter was expected to include satisfaction for her.

I asked her about this later, as we all lounged naked on the bed, sipping Champagne and chatting. She batted the question down with a polished little sidestep ― she explained that she has enough fun just making her clients happy, and it’s too much work to have orgasms all day long anyway. We asked her where she grew up (Venezuela) and how she got into this line of work. (She was initially a stripper but found brothel work safer, with less harassment and more money.) When I wondered aloud whether the post-coital chat was the best or worst part of the job, Carmen assured me she looks forward to connecting with customers and that the old saw is actually true: She often has clients who pay just to talk.

Way too soon, an intercom buzzer rang and a female voice let us know our time was up. I had wondered about security ― surely there was a network of bouncers and cameras and intercoms and emergency buttons to protect the women, but everything was so discreet, we didn’t notice any of it. We jumped up and bustled around, helping Carmen strip the bed and straighten up (even though she insisted we didn’t have to) and then the three of us spilt out into the hallway.

We returned to the bar where we began our adventure for some final chatter and a drink. We were sitting cozily together at a table and laughing at our own newly made inside jokes, when a young woman who looked fresh off a farm joined us. She clearly had a friendly relationship with Carmen and was eager to know, “What exactly do you do in a threesome?” As we happily shared our insights, she turned to me and said with a wink, “This is what happens to a girl when you raise her in a really strict, controlling religion!” I raised my glass and said, “That makes two of us, girlfriend! Amen!”

A drink suddenly arrived at our table for Carmen. It was sent from a gentleman at the bar, and she smiled and raised a toast to him. She got up immediately and, after squeezing my leg in a little goodbye, strutted over to him. I watched as they chatted for a few moments and then she linked her arm in his and led him over to the big lodge door. The last thing I heard as it swung shut behind them was that warm, bubbly giggle, and I found myself sad to see her go. I guess I was jealous after all.

Melissa Duge Spiers is an award-winning screenwriter and memoirist, whose memoir-in-progress, “The Glory Whole,” won the Book Pipeline 2021 Unpublished Manuscript Non-Fiction award. She is represented by Dani Segelbaum/The Carol Mann Agency. For more from her, visit her Instagram at @mdugespiers.