IGP justifies use of water cannons on law students

The decision by the police to use water cannons to disperse law students who were protesting to demand reforms to legal education in Ghana is not wrong, Inspector-General of Police (IGP), James Oppong-Boanuh has said.

He was emphatic that the use of the water cannons was a timely invention to ensure the crowd did not overpower the police.

The Police were lampooned for the excessive use of force on law students who attempted to present a petition to the President, Nana Akufo-Addo, at the Flagstaff House in Accra.

Police, according to reports, used water cannons and fired rubber bullets at the students who had occupied the Ako-Adjei Interchange resulting in heavy vehicular traffic.

Police fired rubber bullets and showered protesters with water from their cannons.

The violence began following disagreement over the route of the demonstration. According to JoyNews’ Komla Adom, the police said they had no information that the protesters would be heading to the Jubilee House, the seat of government.

The police insisted they had no permit to proceed and resisted the protesters who had gathered at Afrikiko, about a 100 meters away from Jubilee House. 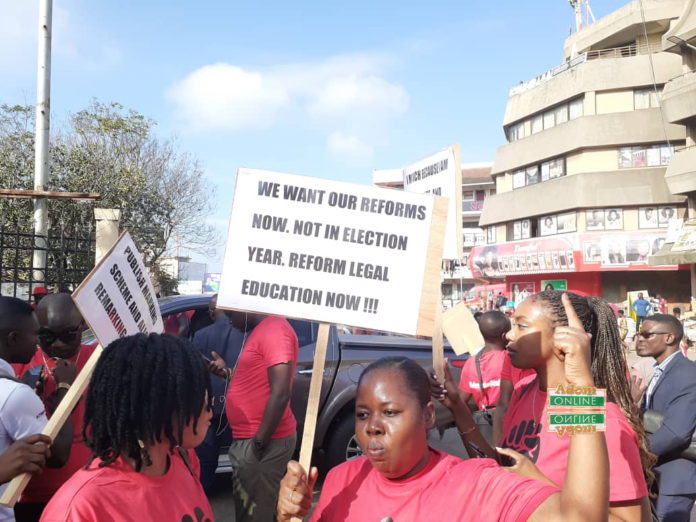 In a statement, the police justified their action and explained that, it used reasonable force to disperse agitating law students.

In support, the IGP in an exclusive interview on Asempa FM’s Ekosii Sen programme, Tuesday said, the police were right to use water cannons.

“There is nowhere in the world you will be allowed in the middle of the road no matter how genuine your grievances are. Using water cannons on the demonstrators was not wrong,” he said.

Mr Oppong-Boanuh was, however, quick to admit there were excesses and they are dealing with them appropriately.