In for a new pair of Adidas Superstars? Make sure they’re by Bape 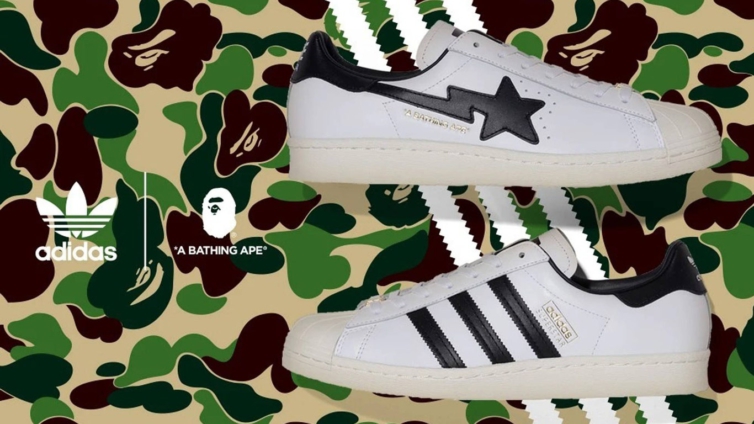 Since its inception in 1969 Adidas’ Superstar has been given more updates than we have time to count: Beyoncé, Thames Mmxx founder Blondey McCoy, Prada, Craig Green, Stella McCartney, and Undefeated have designed limited-edition Superstars in the past 12 months alone.

Adidas doesn’t plan to stop any time soon either. While it’s focusing heavily on its Forum silhouette in 2021 (Beyoncé has already given it a rework, as has Queen Elizabeth II Award For Design recipient Ahluwalia), the Superstar is also receiving plenty of airtime.

Japanese designer Nigo and his streetwear brand A Bathing Ape have now given it a good seeing to.

Unveiled yesterday and slated for a release later this week, the Bape x Adidas Superstar comes in two colourways: “camo” and “white”.

The former features an all-over, multicoloured camouflage print you’re most likely used to seeing across Bape’s hoodies, sweatshirts and accessories.

It also comes with black and olive leather overlays, referencing Nigo’s obsession with the military (aside from his heavy use of camo, he named Bape after the apocalyptic war film Planet Of The Apes).

The “white” Bape Superstar is less of an advancement on design and stays true to the original 1969 black and white colourway, with the subtle addition of a cream-tinted midsole.

What’s more, both pairs of the kicks feature cobranding at the heel and tongue and shiny gold lace dubraes that spell out “Bape” in eye-catching block capitals.

The selling point of the sneaks is undeniably the Bape Sta star design on the outer of one shoe, which replaces Adidas’ Three Stripes.

With Bape’s global fanbase, as well as Adidas’ reputation as the best sportswear brand to come out of Germany, we doubt these will stick around for long when they drop on 27 February at bape.com.

DISCLAIMER: The Views, Comments, Opinions, Contributions and Statements made by Readers and Contributors on this platform do not necessarily represent the views or policy of Multimedia Group Limited.
Tags:
Adidas Bape
Bape