IntelAfrique: Electoral Commission; what to expect on December 7 and days after 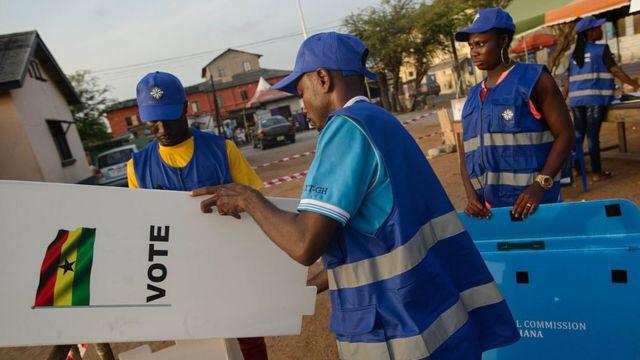 Election Day nears and pressure mounts on the Electoral Commission (EC) as 17million voters and the entire country wait to change or retain the Nana Akufo-Addo administration.

These temporary staff are made up of polling station officials, polling station presiding officers and staff of Constituency Collating Centers with new addition Covid-19 ambassadors.

The officials from the polling stations, after declaration of results sign Pink Sheets, overseen by the Presiding Officer, transfer the ballots to the Constituency Collating Centres for tabulating of all results from each constituency.

Then there is a Returning Officer whose duty is to make sure the results from the Constituency reaches the National Collating Centre.

However, in 2020 the EC has introduced a Regional Collating Center, according to Director of Electoral Services, Dr Serebour Quaicoe. So, Region by Region, the Presidential results will be received at the National Collating Centre and signed by all party representatives and the EC Chair.

In 2016 an enhanced IT system was developed as an improvement on the existing fax system that is used to transmit the results to Accra before the Pink Sheets arrive.

Once the parties verify the results against those received from their representatives at the Constituency Collating Centres, they are signed as the country gets closer to the declaration of presidential results; parliamentary results are declared at the Constituency level.

In 2016, the EC claimed its new IT system which was expected to expedite the process was compromised and announced they would, therefore, manually transmit and verify all results.

This year, EC says they are reverting to manual transmission of results. After results from all 16 Regions come in and have been verified, the EC Chairperson would announce the winner to the nation.

One issue that has been topical in the lead up to the election has been how to verify voters on election day, as this was one of the principal issues that caused a massive legal challenge on the 2012 presidential elections.

The EC insists sufficient steps have been taken to electronically verify all voters with facial recognition added to the biometric verification system. The EC says manual verification would, however, be allowed just in case both systems fail to verify a voter.

The total cost of the 2020 elections is yet to be released. Parliament earlier approved a budget of GH¢1.3 billion for the entire year for the EC.

Some GH¢390 million of this was allocated to the compilation of the new voters’ register. In her brief to Parliament on November 7th, the EC Chairperson revealed the cost of some of the kits procured for election;

As the election approaches, capability and competencies will be tested with the eventual margin of victory possibly determining ultimate confidences.

In an era of unprecedented contested elections, even in the strongest and oldest democratic systems, it has never been more important.

DISCLAIMER: The Views, Comments, Opinions, Contributions and Statements made by Readers and Contributors on this platform do not necessarily represent the views or policy of Multimedia Group Limited.
Tags:
Election 2020
Election HQ
Electoral Commission