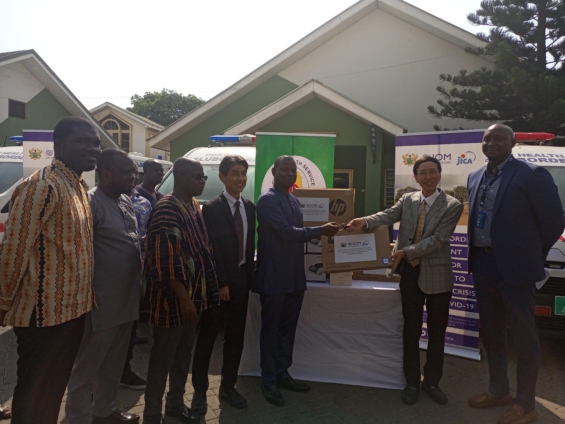 The International Organisation for Migration (IOM) has donated equipment and ambulances to the Ghana Health Service (GHS) to enhance its border health services.

The equipment, donated in collaboration with the Japan International Cooperation Agency (JICA), formed part of the IOM’s project to strengthen overall border management capacities at the key points of entry.

The beneficiary borders include Paga in the Upper East, Elubo in the Western Region, and Aflao in the Volta Region.

Mr Nnamdi Iwuora, the Senior Programme Manager IOM, said the pandemic had caused severe setbacks and had far-reaching consequences that were still felt in the economy, environment, and social spheres.

He noted that in addition to the equipment, construction of Water, Sanitation and Hygiene (WASH) facilities and prefabricated isolation structures were also ongoing at the three borders and would be handed over to the Government upon completion.

“All these will contribute to reinforcing points of entry capacity to better prepare for and respond to current and future potential health crises,” Mr Iwuora stated.

Mr Hisanobu Mochizuki, the Japan Ambassador, speaking at the ceremony, said the project was necessary due to the threat the COVID-19 pandemic posed on peoples’ lives and the global economy.

He said border restrictions during the pandemic affected not only the movement of people but also that of goods, disrupting supply chains all over the world, especially in Africa.

“Based on that experience, we learned how public health emergencies are closely tied with economic crises, highlighting the importance to enhance border capacity in terms of both public health and trade”, he stated.

Yasumichi Araki, the Chief Representative of the JICA Country Office, said the donation was made to land borders in Africa to fight not only the pandemic but other infectious diseases.

He said Regional Integration and trade facilitation on land borders contributed immensely to economic growth, adding that the movement of goods and people were the blood vessels of the economy.

However, Mr Arak, noted that the Covid-19 pandemic obstructed the flow of borders especially the land borders across the world.

He said “today, within the post-COVID-19 pandemic, developing the capacity to respond to infectious diseases in the context of border management has become very crucial.”

Mr Araki said this would enable the country to secure the frontiers and safeguard herself from the risks of the spread of diseases involved in the movement of goods and people.

Dr Patrick Kuma-Aboagye, the Director-General of GHS, thanked the IOM for the support, adding that Port health was important and as such, the donation would help the country immensely.

He also expressed gratitude to JICA for its continuous support of the service over the years.

Dr Kuma-Aboagye noted that most of the diseases encountered in the country were all transmitted through the borders and thus gave the assurance that the items donated would be utilised effectively to achieve the outcome of the project.

DISCLAIMER: The Views, Comments, Opinions, Contributions and Statements made by Readers and Contributors on this platform do not necessarily represent the views or policy of Multimedia Group Limited.
Tags:
GHS
IOM Ghana
JICA