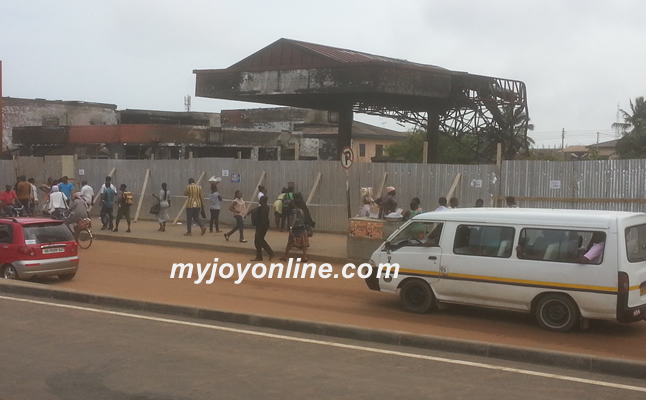 It is past 4:00 pm. It is cloudy in Accra with few drizzles. For any other resident and on any day, it is just the perfect weather but obviously not for the residents of Adabraka.

It is exactly one month after flood and fire, two of the biggest destructive elements, claimed the lives of over 150 people in Accra.

The June 3 disaster avenue in Accra- the stretch of road from the GCB Tower at Circle to the East Cantonment Pharmacy- is alive!

That road has been opened to traffic; to business and to any other thing that made that avenue one of the most patronised areas in the city.

Mates of commercial drivers are still yelling at their prospective passengers and still parking rather indiscriminately.

There is a big sound system fixed on the shoulders of the road screaming; the song is loud but the message is not one to excite.

Close to the system is a small canopy under which a few young men have gathered. And if the message in the song does not communicate anything, the sight of the young men with their heads strapped in red bands should tell the story better.

They are mourning. Samuel Kweku, 27, a friend, a colleague, is no more. He drowned and got burnt in a disaster of humongous proportion. It claimed over 150 lives and left in its wake a relic of what used to be a vibrant Goil Filling station, a chain of restaurants.

Two and three storey buildings which were homes to families have been left desolate, torn and tattered; the ashes on the frames serve a painful reminder of just how high and how ferociously the fire swept through the years of toil.

The shops that served food and provided shelter, fuel and hospitality have become the places of grief where people point to, converge and share experiences of a disaster that no one wants to happen again.

Some of those people Myjoyonline.com chanced upon could not even tell exactly where a chemical shop, they used to buy medicine from was sited. That shop is no more and so are many others.

In the midst of this gloom, however, is the story of grace told by the manager of Dr. K Forex Bureau. His shop is the last of the chain of shops in the affected area.

Edwin Lawson told Joy News it was not a matter of luck that his shop remains standing but only by the grace of God.

He left the shop earlier that night only to hear the news about the disaster the following day. Even though the flames did no harm, the floods did.

Unlike the many others whose businesses have been turned into ashes, Lawson says he has life; he still has his business and even if business is low for now, he a lot to be thankful for and more importantly, he is hopeful that things will pick up.