Kabul bombings: ‘We will hunt you down’, Biden warns attackers 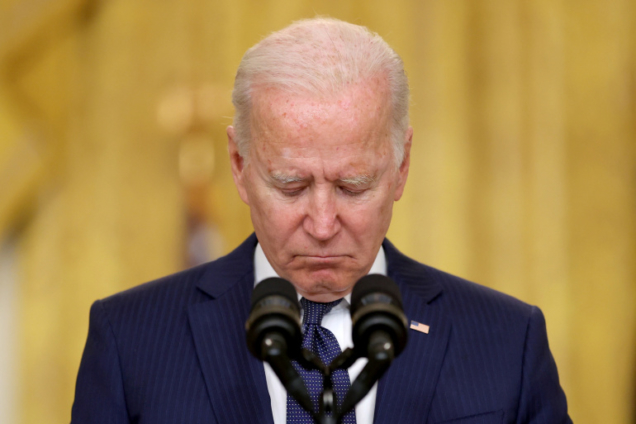 U.S. President Joe Biden reacts during a moment of silence for the dead as he delivers remarks about Afghanistan, from the East Room of the White House in Washington, U.S. August 26, 2021. REUTERS/Jonathan Ernst

United States President Joe Biden vowed to retaliate against Thursday’s attack in Kabul, saying that he will hunt down those responsible and make them pay.

Biden confirmed in a speech from the White House on Thursday that the bombings were carried out by the Islamic State in Khorasan Province, ISKP (ISIS-K), ISIL’s affiliate in Afghanistan.

The attack had killed dozens of people, including Afghan civilians and at least 13 US service members.

It is believed to be the most US troops killed in Afghanistan in a single incident since 30 personnel died when a helicopter was shot down in August 2011.

“To those who carried out this attack, as well as anyone who wishes America harm, know this: We will not forgive; we will not forget,” Biden said.

“We will hunt you down and make you pay. I will defend our interests in our people with every measure at my command.”

American service members had not been killed in combat Afghanistan since February 2020.

Biden had postponed his engagements for the day, including a meeting with Israeli Prime Minister Naftali Bennett, to focus on the situation in Afghanistan.

General Kenneth McKenzie, commander of the US Central Command, confirmed earlier on Thursday that airlifts will not stop after the attack.

“Our mission is to evacuate US citizens, third-country nationals, Special Immigrant Visa holders, US embassy staff and Afghans at risk,” McKenzie said. “Despite this attack, we’re continuing the mission.”

Joint Chiefs of Staff Chairman Mark Milley, the top US general, also said the American military remains “focused and steadfast on this mission”.

“These brave men and women are taking risks to save lives of the vulnerable and safeguard Americans,” Milley said. “They’ve moved more than 100,000 people to safety. I could not be prouder of their service. They gave their lives to save others; there is no higher noble calling.”

In Washington, politicians from both major parties condemned the attack, with Republicans taking aim at Biden over the withdrawal decision.

“To say that today’s loss of American lives in Kabul is sickening does not begin to do justice to what has happened,” Hawley wrote on Twitter.

“It is enraging. And Joe Biden is responsible. It is now clear beyond all doubt that he has neither the capacity nor the will to lead.”

Kevin McCarthy, the Republican leader in the House of Representatives, said enemies of the US were taking advantage of the “chaotic nature of Biden’s withdrawal”.

He called on House Speaker Nancy Pelosi to convene Congress to “prohibit the withdrawal of our troops until every American is safely out”.

Horrific. Our enemies have taken advantage of the chaotic nature of Biden's withdrawal.

Speaker Pelosi must bring Congress back before Aug 31 so we can be briefed thoroughly by the Administration and prohibit the withdrawal of our troops until every American is safely out.

US troops are set to withdraw by the end of the month, and the administration says it is “on pace” to evacuate all Americans before August 31.

For her part, Pelosi called on the White House to keep lawmakers involved in the handling of the situation.

“As we work with the Biden Administration to bring stability to the situation, Congress must continue to be kept closely informed, which is why I have requested that the Executive Branch continue to brief Members,” Pelosi said in a statement.

“At the same time, our Committees of Jurisdiction will continue to hold briefings on Afghanistan.”

Congresswoman Ilhan Omar, a progressive Democrat, called for intensifying the evacuations after the attack.

Today's terrorist attack on Afghans and U.S. service members was horrific, yet another reminder of the terror the people of Afghanistan continue to face.

Now is the time to redouble our evacuation efforts and do everything we can to get people out who are most at risk.

ISKP had claimed responsibility for the attack in a statement that identified the bomber by name and referred to the Taliban as “apostates”.

McKenzie said US forces are coordinating with the Taliban to address the “extremely real” threat of attacks by ISKP.

But earlier in the day, Bob Menendez, the Democratic chair of the Senate Foreign Relations Committee, warned against trusting the Taliban.

“As we wait for more details to come in, one thing is clear: We can’t trust the Taliban with Americans’ security,” Menendez wrote on Twitter.

Biden defended the coordination with the Taliban in his speech on Thursday, saying that the relationship with the group is one of convenience, not trust.

“It’s in their self-interest that we leave when we said, and that we get as many people out as we can,” the US president said.

He also reiterated his defence of the withdrawal decision. “Ladies and gentlemen,” Biden said, “it was time to end a 20-year war.”