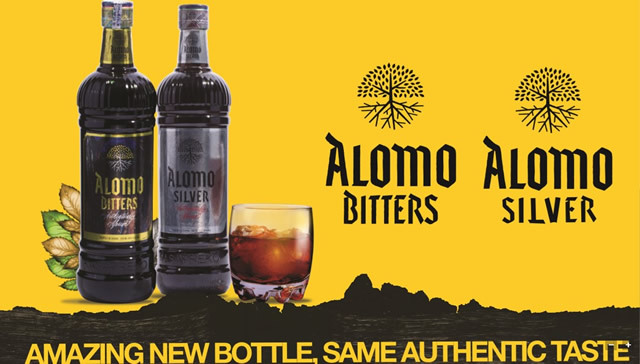 Produced by Ghanaian-owned total beverage maker Kasapreko Company Limited, the new look for the multiple-award winning Alomo Bitters comes in the form of a sleek bottle with an already existing hologram security seal, a step seen by many as a major innovation drive for the product.

At a colourful ceremony recently held in Accra, the new look for Alomo Bitters and all its variants was unveiled and the first bottle was customised and presented to President John Dramani Mahama who graced the well-attended occasion with high-level personalities, stakeholders and industry players in the country.

According to the Chief Executive Officer of Kasapreko, Mr. Richard Adjei, innovation and quality are the biggest launch pad that drives sustainability of a product.

“It is in this spirit that we have renovated our flagship brand Alomo Bitters by giving it a bold new look and standard befitting of an international brand whilst maintaining its authentic liquid that it’s renowned for,” Mr Adjei added.

The product is said to be the embodiment of the success that propelled Kasapreko into cutting across the world.

Marked as Ghana’s first scientifically crafted herbal based alcoholic beverage, Alomo Bitters in 1997 became the country’s first herbal bitters produced on an industrial scale, an achievement that saw a major success breakthrough for the beverage manufacturer.

The product has been at the top of the list when it comes to herbal alcoholic beverages in Ghana and now in several African countries, even spreading beyond the continent.

Alomo Bitters which is packaged in 200ml PET and 750ml glass bottle has won several local and international awards, the recent being the Official Tourism Drink of Ghana. In 2012 Alomo Bitters became a Super Brand. In the last quarter of 2013, CNN Money identified Alomo Bitters to be among the top five emerging brands in the world.