Kelly Rowland is on a mission to create the perfect heels 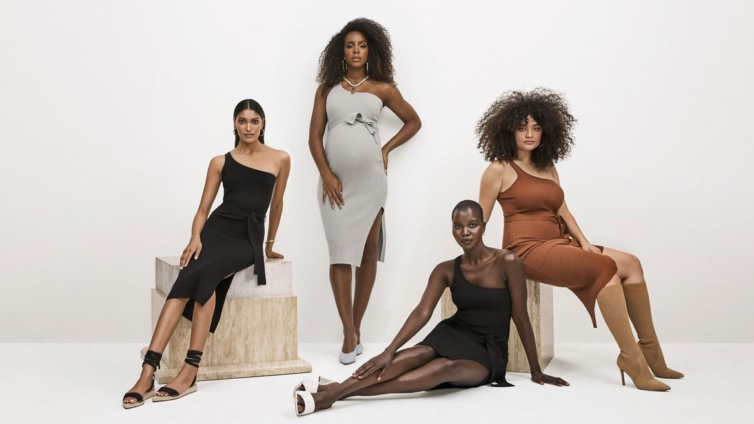 It may be too early to settle on 2021’s official vibe, but many are using the year to explore new opportunities.

For Kelly Rowland, the time is right for a new endeavor—or several. Since January, Rowland has given birth to her second child with husband Tim Weatherspoon, recorded new music, filmed a movie, and celebrated her 40th birthday.

If that wasn’t enough excitement, the multi-tasking superstar is also expanding her fashion empire. With this week’s launch of her latest capsule for JustFab, Rowland debuts a chic lineup of footwear and clothing designed with comfort in mind.

“My grandmother would say ‘you’ve only failed if you didn’t try,’” Rowland shared on the phone from Los Angeles. “Now that I’ve been working on so many things, I’m just excited to see the possibilities, especially with this collection.”

Though she’s used to performing in towering heels or wearing them on the red-carpet, Rowland has switched gears since the coronavirus crisis began.

As a working mom juggling multiple projects, she understood how much customers value ease of wear and wanted her the first collection she designed to address that.

“Even before I began the collection, I was thinking about the shoes that I loved [and] the ones I reach for more than heels,” says Rowland.

“The dynamic has changed since pandemic started. You saw it especially during this summer when many people were wearing comfortable sandals, slides, and tennis shoes. Seeing that got me thinking about how those changes translate to Spring.”

The relaxed vibe of the seven-piece lineup is evident in pieces like Aphrodite sandals, a square-toed high heeled mule with woven detailing, and Clio, a flat espadrille upgrade with lengthy leather straps.

Even her refined take on the combat boot, the Enyo, feels easygoing and appropriate for warmer weather.

Of all the fashion categories, footwear may be the most difficult to get right. With all the quirks in sizing and the range of user needs that must be addressed within each pair, it’s a trial and error process.

For Rowland, the perfect sandal was a goalpost, one that required multiple trips to the drawing board to achieve. “I had a pair of shoes similar to our Athena sandal five or ten years back,” she explains.

“They were beautiful but completely flat, and my foot would cramp when wearing them. When we were discussing the designs, we knew it had to incorporate an arch, and there should be padding and extra cushion too [because] when you’re buying clothing and shoes, they need to give you the benefit of comfort.”

Keeping things fashion-forward was also a priority. A runway enthusiast with a love of ’90s style, Rowland was influenced by the embellished shoes that feature in the vintage collections she loves.

Designers are often the best representatives of their aesthetic, and it’s no different with Rowland.

Front and center in the advertising imagery, she was photographed eight months pregnant alongside model-activists Nykhor Paul, Diana Veras, and Pritika Swarup, each serving as a different facet of the collection’s woman.

Juggling casting and posing for a campaign shoot while pregnant sounds like a challenge, but Rowland was grateful for the creative outlet.

“It was another way to not think about the pandemic,” she explains. “Being able to express myself and take me out of that moment. I wanted the campaign to be diverse in terms of looks, styles, and body types. They’re all so different; Nykhor is gorgeous, of course, but you can feel her strength in the way she carries herself. Then you have Diana, who has an effortless quality that came through on set, in her movements and how she wore the clothes. Pritika was so graceful and had this calm about her. Together they just brought the clothes to life.”

That vibrant, feminine spirit is something Rowland wanted to imbue the pieces with. More than just shoes, the collection also includes sharp-shouldered blazers, knit dresses that merge slinky with cozy, and tailored trenches.

Offered in shades of black, cream, blush, and olive, the lineup can easily merge into an existing wardrobe, or be worn solo for a minimalist look. “It’s that timeless 90s style,’ says Rowland.

“I’ve been wearing it already, particularly the dresses, which were what I was able to fit while I was pregnant. They have just a little stretch and a nice slit on the side, so I had that comfort but still felt cute.”

Having just celebrated her 40th birthday with a socially-distanced date night at home with her husband, Rowland is entering a new chapter of her life. Hitting the milestone was fun, but she isn’t interested in conforming to old notions about how a woman should dress after a certain age.

“There aren’t rules anymore,” says Rowland. “You should have fun with fashion. Am I going to wear those low-rise jeans that I had when I was 20-years-old? Hell no, but it’s because I feel differently now. So you find what feels good and embrace it.” When it comes to ignoring those old rules and having a great time with clothes, Rowland even has a muse in mind.

“Thank God for J.Lo!” she says with a laugh. “She dresses for herself, pushes what society feels like women should or shouldn’t wear, and has such confidence. I love her for that.”

Given her fearless personal style and new fashion output, odds are millions of women look to Rowland for the same sort of inspiration.

DISCLAIMER: The Views, Comments, Opinions, Contributions and Statements made by Readers and Contributors on this platform do not necessarily represent the views or policy of Multimedia Group Limited.
Tags:
Fashion
Heels
Kelly Rowland