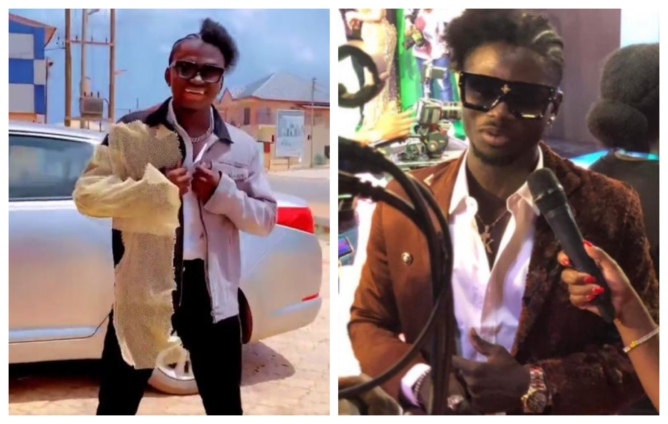 The lookalike of Highlife artiste, Kuami Eugene, has taken his imitation of the artiste to another level.

The young man who went viral for his striking resemblance to the artiste was seen with the same hairstyle and outfit concept, ‘Rags to Riches’ that Kuami Eugene graced the VGMA red carpets with.

One side of his outfit was designed with a faded yellow sponge that went beyond his waist line while the other looked like a normal jacket.

Highlife artiste, Kuami Eugene, on Saturday, May 7, showed up on the red carpet of the Vodafone Ghana Music Awards with his most daring outfit yet.

He was seen in a suit with one side of his head braided and the other combed out. His outfit also had two sides to it, one with a luxury suit and the other with a normal suit.

The outfit which he explained was a concept, had social media users calling on his label mate KiDi to lend his stylist to Kuami Eugene.

But, explaining his outfit, Kuami Eugene said it is a concept he was working on for his upcoming album, Rags to Riches.