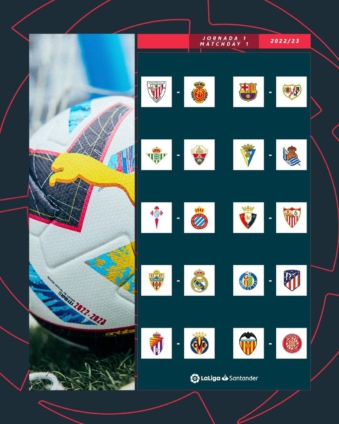 The 2022/23 LaLiga Santander season is ready for take-off, with a fascinating Matchday 1 to take place across this coming Friday, Saturday, Sunday and Monday.

Real Madrid, FC Barcelona and Atlético de Madrid, last season’s top three, will not be able to ease into this new campaign, as they have some tricky tests in this first weekend, meaning the title race is on from the very first minute.

Sevilla FC, another of the top teams in the division, also have a difficult fixture as they visit CA Osasuna for the 2022/23 LaLiga Santander season’s opening match at 19:00 GMT on Friday night. After making it into the top four for three seasons in a row, Julen Lopetegui’s team will hope for another year in the Champions League spots, but CA Osasuna are a solid and well-drilled outfit, one that usually starts each new season well.

After Friday night’s opener, there are three more matches on Saturday. RC Celta host RCD Espanyol in what will be Diego Martínez’s first official game in charge of the Catalan club, so that should be an interesting tactical tussle. Then, Real Valladolid are the first of the newly promoted sides to take to the pitch, as they welcome Villarreal CF to the Estadio José Zorrilla.

On Saturday night, at 19:00 GMT, FC Barcelona begin their pursuit of a first championship in four seasons when they face Rayo Vallecano at the Camp Nou. Xavi has several new stars in his squad and will hope they come together for a winning start, but it must be kept in mind that Rayo Vallecano did win home and away at Barça last season.

Sunday brings another slate of three fixtures, starting with Cádiz CF vs Real Sociedad. Mikel Oyarzabal scored both goals as La Real won this fixture last year, but the Basque side must do without their talisman for a few months because of a serious injury, meaning other talents will have to step up.

Valencia CF vs Girona FC follows as Gennaro Gattuso takes charge of his first LaLiga Santander match against one of the newly promoted sides. Girona FC cannot be underestimated, though, especially as they have recruited well by bringing in players such as MLS top scorer Taty Castellanos to complement the veteran Uruguayan Cristhian Stuani.

Real Madrid then begin their title defence on Sunday night at 20:00 GMT, doing so on the south coast away at UD Almería. It’ll be a battle of champions, as UD Almería secured promotion as the LaLiga SmartBank winners last season. Not since 2006/07 and 2007/08 have Los Blancos won two LaLiga Santander titles in a row, so Carlo Ancelotti and co. know how hard it is to retain the most important trophy in the country.

There is then some thrilling Monday night football in store, with three matches taking place then. Athletic Club vs RCD Mallorca is one of them, with Ernesto Valverde making his return as the Basque side’s coach in front of what will be a buzzing San Mamés.

Then, Atlético de Madrid will kick off their campaign just a few kilometres down the road, as they visit Getafe CF. Diego Simeone’s side defeated their neighbours twice last term, but required last-minute goals on both occasions. So, Atleti know this will be a battling start to 2022/23.

The opening matchday reaches its conclusion at the Estadio Benito Villamarín, where Real Betis take on Elche CF. After two successful seasons under Manuel Pellegrini, Real Betis want to push on and finish inside the top four this season. With Nabil Fekir, Sergio Canales, Juanmi and Borja Iglesias, they certainly have the front four to achieve this. For them, and for all the clubs of LaLiga Santander, getting off to a winning start would be priceless.