Late Mahama to be buried in his hometown? - MyJoyOnline.com

Late Mahama to be buried in his hometown? 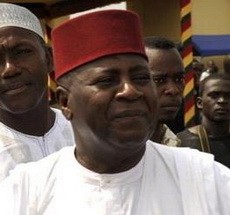 The family of the late former Vice President Aliu Mahama has decided to have their relative buried in his hometown Tamale.

Alhaji Aliu Mahama who passed away yesterday from a cardiac related condition was initially supposed to be buried at the Asomdwee Park but the family has opted for his hometown instead.

Family member and Chief of Vohindi under the Naantong Paramouncy, Naa Naantongmah Mahama told Joy News the decision is to have their descendants revere their relative a lot more.

“The preliminary decision of the family is to carry our late father to Tamale for a befitting burial. This is because he is an icon. He is a mentor for the whole of the three Northern Regions. So we cannot afford to live him in Accra here. This will inspire our children to get further above where he got to,” he said.

Meanwhile, a family delegation is in a crunch meeting with government at the Castle after which a firm decision will be announced.

Many continue to pour in at the former Vice President’s residence to commiserate with the Mahama family.

Notable personalities like the Archbishop Palmer Buckle and Foreign Affairs minister Alhaji Mohammed Mumuni offered their condolence to the family.

The Foreign Minister told Joy News the late Vice President’s exemplary leadership should be one politicians must emulate.

The book of condolence has also been opened by the family and also another for the New Patriotic Party.