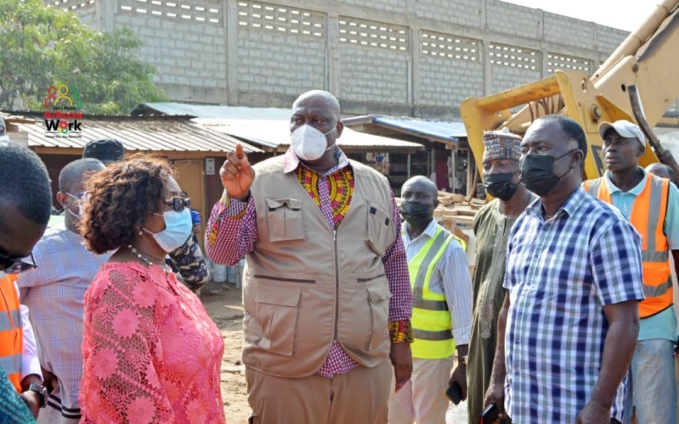 The Ledzokuku Municipal Assembly (LeKMA) has given squatters along the Manet Junction and a section of the Tema Motorway a three-week ultimatum to remove their illegal structures.

Serving the encroachers with an eviction notice, the assembly noted that should they go contrary to the order, their properties will be demolished.

LeKMA’s Chief Executive Officer, Evelyn Twum-Gyamrah, during an inspection tour by the Greater Accra Regional Minister, Henry Quartey, to the assembly on Tuesday indicated that the move is to ensure sanity in the area.

Mrs Twum-Gyamrah noted that the “squatters” had been pilfering electricity and water in the area.

She added that they facilitate unauthorised entry and exit onto the motorway in a manner that often causes accidents.

She said the assembly had not been successful with the effort since 2019, despite forcibly evacuating the settlers on some occasions.

But this time around, she intimated that the assembly is resolved to perform the task and sustain it by deploying a task force to the areas to ward off the squatters.

Already, she said, the exercise has begun at some part of the Tema Motorway where a 20-acre plot had been secured.

“We won’t relent; we will keep on doing this until the area is devoid of encroachers and other illegal settlers,” Mrs Twum-Gyamrah stressed.

Mr Quartey’s tour forms part of his routine to assess the level of discipline in the system and the success of the “Let’s Make Accra Work” initiative.

At ONMA, the Chief Executive, Boye Laryea, said the assembly would demolish illegal structures around the high tension electric system at the Lapaz New Market.

He said the assembly would serve eviction notice to the settlers to pave the way for the exercise.