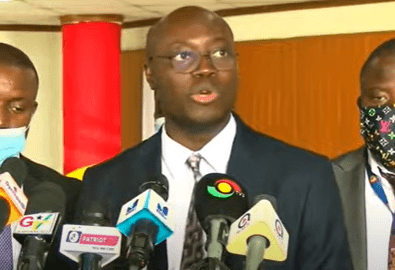 Ranking Member on the Finance Committee of Parliament, Dr. Cassiel Ato Forson says Ghana’s economy will become a disaster if the government does not let go of its “empty pride” and seek support from the IMF.

According to him, the country’s economy is headed in the direction of Sri Lanka’s and if action is not taken now “we may be going to the IMF…in an ambulance.”

According to Sri Lanka’s Prime Minister, Ranil Wickremesinghe the country’s debt-laden economy, has  completely collapsed after months of shortages of food, fuel and electricity, and warned of even direr situations to come.

Speaking on JoyNews’ PM Express, Dr. Ato Forson urged the government to take the decision to go to the IMF immediately, or die trying.

“Currently as we speak, the Ghanaian economy is in tatters, in fact, we’re in deep crisis. If we do not take decisions now, this crisis will become a disaster. And that is what I’m warning against…Our economy the way it is going is headed towards an accident; you know what an accident is.

“And I can tell you for sure that if the government fails to take action today and would wait any further, two three months six months further would mean we would end up entering the year 2023 limping,” he said.

“Let no one tickle you and get you to believe that the gross international reserve because it’s at 3.7% so we’re in a good position. The chunk of that reserve out there is in incumbent. The net international reserves are in a precarious situation. We should be warned and the government should take action today.

“We’ve been told that the Central Bank is rationing forex to the extent that they have to cough 450million US dollars a month just to buy petroleum products for our consumption. They’re struggling to make money available for less than 20% of that 450million US dollars.

“Dollars are not in town, our BOP isn’t doing well, our reserves are being depleted, our revenues are not coming, for simple reason being the government isn’t doing enough in terms of collection, and we know where the debt levels are, it’s scary,” he said.

Dr. Ato Forson further noted that the government has been borrowing to pay off its debts.

He has urged the government not to be shortsighted in dealing with the crisis before it becomes a disaster.

“Our debt is the single most important thing that I urge this country to confront but the government is not doing enough. It will surprise you to know that in the first three months of the year government collected tax revenue just about 10.6billion but we ended up paying interest and amortizing our debt in excess of 11.8 billion so clearly what it means is that we are borrowing to pay for our debt.

“That is what it is, and I’ve urged the government not to be shortsighted. And I’ve heard my colleague Kwaku Kwarteng when he said that we don’t need IMF. I’ve heard the Minister of Finance saying that. But you see Minister of Finance, yes we are proud people, but this is an empty pride if indeed the country requires us to take a decision,” he said.