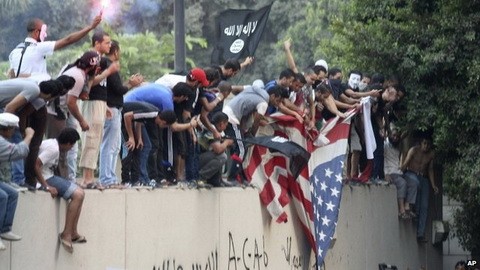 Libyan authorities have arrested some 50 people in connection with last week’s deadly attack on the US consulate in Benghazi, the president of Libya’s interim assembly says.

Mohamed Magarief told CBS News he had “no doubt” the attack was pre-planned.

That appears to contradict US envoy to the UN Susan Rice who told ABC that the evidence suggested it had been part of “spontaneous” protests.

US Ambassador Chris Stevens and three other US consulate staff were killed.

They died when the consulate in Benghazi was set ablaze, in protests apparently inspired by demonstrations at the US embassy in the Egyptian capital, Cairo.

It was part of a wave of violent protests in the Muslim world over an anti-Islam film made in the US.

Some of the suspects in last Tuesday’s violence in Benghazi were from outside Libya, Mr Magarief told CBS News.

“It was planned, definitely, it was planned by foreigners, by people who entered the country a few months ago, and they were planning this criminal act since their arrival,” he said.

He said the suspects were connected to al-Qaeda, or its “affiliates and maybe sympathisers”.

“We don’t know what are the real intentions of these perpetrators,” he said. “They entered Libya from different directions. Some of them definitely from Mali and Algeria.”

Al-Qaeda in the Arabian Peninsula has said in a statement the attack avenged the killing of Abu Yahya al-Libi – a Libyan-born al-Qaeda commander killed in June by a US drone strike in the North Waziristan-Afghan borderlands.

Ms Rice, meanwhile, told ABC that the the US’s “current best assessment” was that “this began as a spontaneous not a pre-meditated response” to the protests in Cairo.

“As that unfolded it seems to have been hijacked, let us say, by some individual clusters of extremists who came with heavier weapons, weapons that as you know in the wake of the revolution in Libya are quite common and accessible and then it evolved from there,” she added.

The Benghazi violence was followed by a string of attacks on US consulates, embassies and business interests across the Middle East and north Africa. British, Swiss, German and Dutch properties were also targeted.

Two people were killed during protests outside the US embassy in the Tunisian capital, Tunis on Friday, while three were killed in clashes in the Sudanese capital, Khartoum.

On Saturday, the US ordered all non-essential staff to leave Tunisia and Sudan, fearing further violence. The US had asked Sudan for permission to send troops to protect its Khartoum embassy, but the request was turned down.

A State Department statement also advised US citizens in Tunisia to leave by commercial flights and those in Sudan to “exercise caution at all times”.

The Canadian government announced on Sunday it was closing its embassies in Sudan, Libya and Egypt for the day as a precautionary measure.

The US and Canadian announcements came as Al-Qaeda in the Arabian Peninsula called for fresh attacks against Western embassies, describing the recent unrest as “a great event”, and urging protesters to unite to “expel the embassies of America from the lands of the Muslims”, AP reports.

Meanwhile a man involved in producing the film – a low-budget, amateurish production called Innocence of Muslims – has been questioned by police in the US.

Nakoula Basseley Nakoula has admitted his role in the film but investigators are trying to find out whether he was the internet user named “sambacile” who posted a clip of it online.

Nakoula was freed on probation in June 2011 on condition that he did not use the internet without authorisation or assume aliases.

He was released by police after questioning and may have gone into hiding, the Associated Press reports.