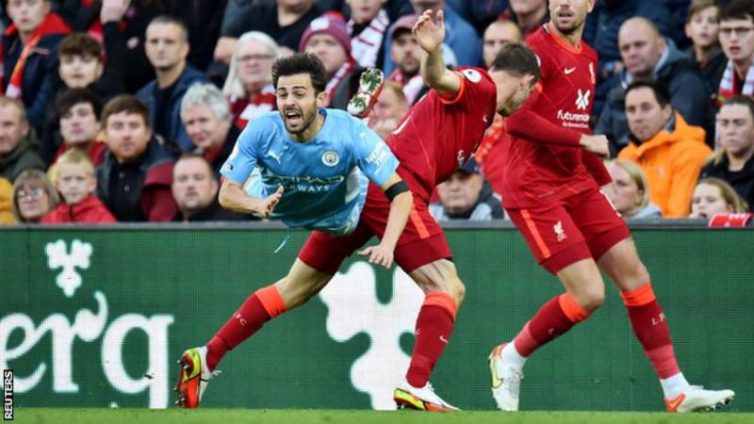 It was the two-minute period that threatened to shape this season’s Premier League title race.

Anfield. Liverpool v Manchester City. The champions of the past four seasons, separated by just 11mm in 2018-19 and one point so far in this campaign. The score is 1-1.

James Milner – filling in at right-back in place of the injured Trent Alexander-Arnold – is already on a yellow card when he sticks a leg out and takes down a charging Bernardo Silva in the 74th minute.

Most expected referee Paul Tierney to reach for his pocket again to book the stand-in Reds full-back and follow that with a red, handing the visitors a one-man advantage.

Instead, Tierney blows his whistle, awards the foul, speaks to Milner… but shows no card.

Seconds later, Mohamed Salah rubs salt into the Spaniard’s wounds, somehow weaving around a series of challenges in the City box before slotting in one of the great Premier League goals.

And to really cap things off for Guardiola, Tierney decides he has had enough of the City boss’ protestations… and shows him a yellow card.

Kevin de Bruyne eased some of his manager’s angst with a deserved equaliser, but the incident involving Milner was still on Guardiola’s mind after the final whistle had blown on a thrilling contest.

“But it’s Anfield, it’s Old Trafford. In our situation a City player is sent off. It’s clear. It was a second yellow.

He continued along the same lines when speaking to BBC Radio 5 Live.

“It was a yellow card, it was too obvious,” he continued. “I know for referees it is not easy at Anfield and Old Trafford – there is a lot of pressure for everyone.

“Football is about emotions but it is obvious it is a yellow card.”

And then finally, in his post-match press conference, he expanded on the importance of the moment.

“In these games, so tight… he has to. It doesn’t mean you are going to win against Liverpool in Anfield but it is obvious, [he needed] to give James the second yellow.”

Liverpool boss Jurgen Klopp took a leaf out of Arsene Wenger’s book when asked about the incident.

“Pep got a little bit outraged over that,” he told Sky Sports. “I didn’t see but I saw Pep’s reaction obviously. I didn’t know exactly why he did that.

“Milly [Milner] did incredibly well first half and it is not easy to defend these guys.”

Guardiola could be seen gesturing towards Liverpool fans after the Milner incident as they revelled in his displeasure.

‘The standard of officiating keeps getting worse’ – what you said…

Specs: Man City fans will rightly be furious after this game. How Milner has stayed on is crazy. Nothing these refs can say will make sense. We have the worse officials in Europe.

Andrew Mitchell: Pep has every right to be raging there. Milner’s foul was as cynical as it gets, should clearly have been a second yellow. File this squarely under “the ref has bottled that.”

Alex Haworth: A referee bottles a second yellow in pretty much every game I see.

Seth Gogo Egoeh: The standard of officiating keeps getting worse! How did Milner escape a second booking there? This is incredible! Are these the best referees EPL can offer? Pathetic!

Ed O’Toole: It was never a yellow card. Milner deflected the ball with his left foot and an unbalanced Silva having been nudged by Henderson fell over Milner’s outstretched leg. But Milner kicked the ball first!