Liverpool climbed to the top of the Premier League table for the first time under Jurgen Klopp with a dazzling 6-1 demolition of Watford at Anfield on Sunday.

Sadio Mane scored twice for the Reds, while Philippe Coutinho, Emre Can, Roberto Firmino and Georginio Wijnaldum were also on the scoresheet as Liverpool produced the kind of performance that will fuel talk of a serious title challenge on Merseyside.

After a 1-1 draw in the north London derby between Arsenal and Tottenham earlier on Sunday, Klopp's side had the opportunity to knock Chelsea off top spot.

They duly delivered with a breathtaking display which owed much to the brilliance of Brazil internationals Roberto Firmino and Philippe Coutinho.

Liverpool were without centre-back Dejan Lovren, who missed out with a virus, so Lucas Leiva slotted in alongside Joel Matip.

Watford manager Walter Mazzarri also made an enforced change as Sebastian Prodl was ruled out with an abductor injury and replaced in defence by Daryl Janmaat. 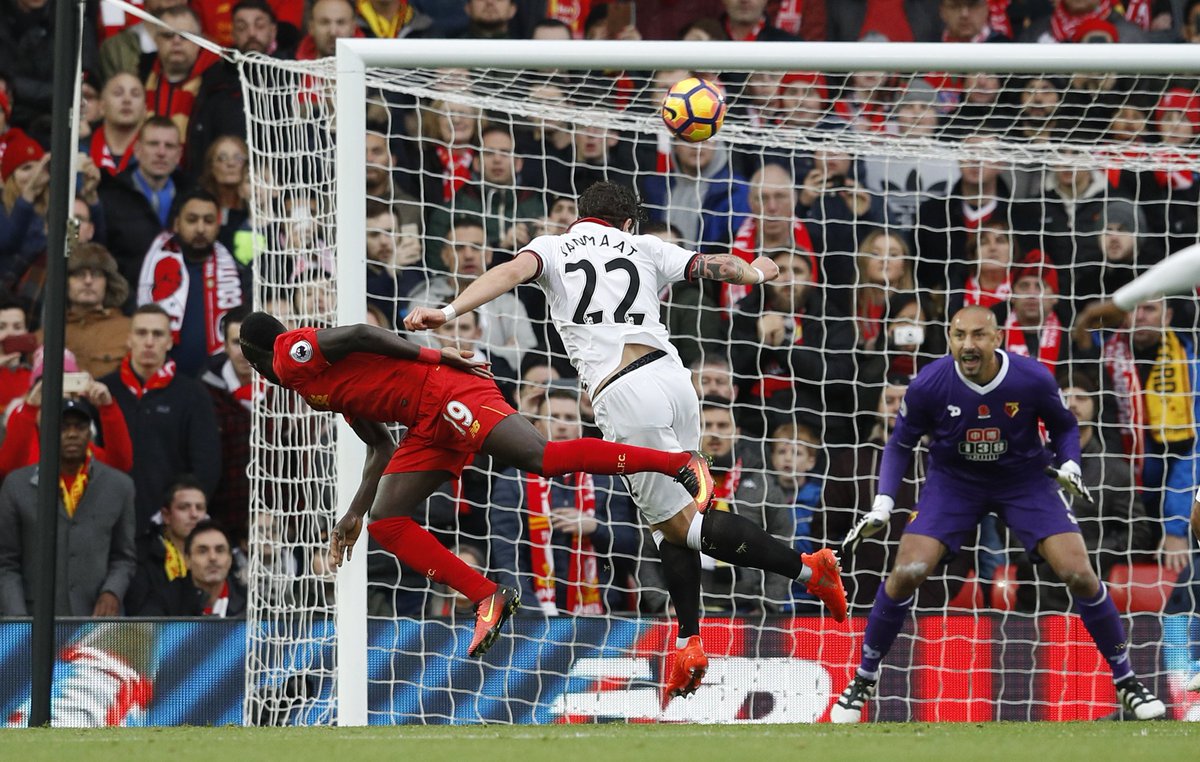 Watford, who came into the match on the back of three clean-sheets, were initially disciplined defensively as they sat back and looked to hit Liverpool on the counter attack.

However, Liverpool's pressure was unrelenting as they poured forward in search of the opening goal and it felt like it would only be a matter of time before the net would bulge.

By the half-hour mark they had a two-goal advantage with Coutinho instrumental.

A cleverly worked short corner with James Milner allowed Coutinho to pick out Mane, who escaped the attentions of Janmaat and glanced a header high into the net.

Slick and energetic passing has featured prominently in Liverpool's play this season and their second goal was another example as Mane and Firmino combined on the right flank.

The ball found Coutinho on the edge of the box and he cut back inside with his first touch to create a shooting opportunity and then struck a powerful low effort past Watford goalkeeper Heurelho Gomes.

Watford's afternoon went from bad to worse as Gomes limped out of the action having landed awkwardly as he attempted to keep out Coutinho's goal and was replaced by Costel Pantilimon. 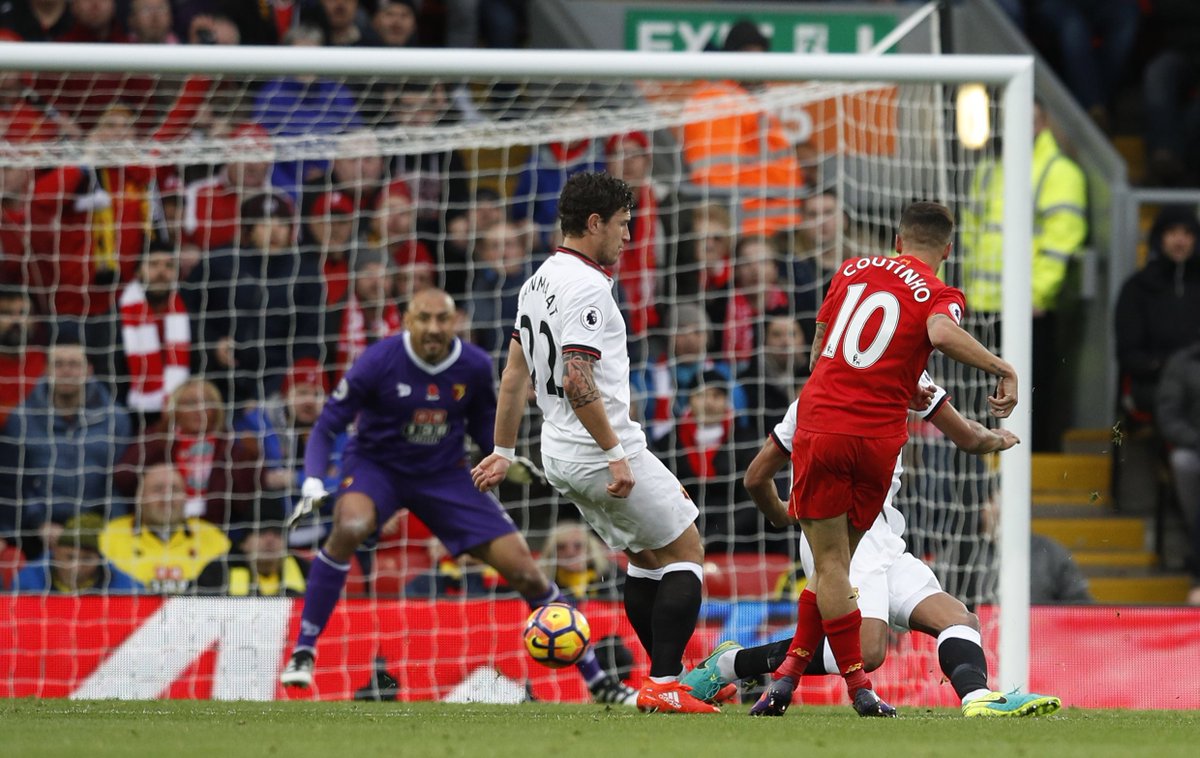 If the Hornets had hoped for some sympathy from Liverpool it was not forthcoming as the intensity from Klopp's side continued and they effectively ended the game as a contest before halftime.

A high ball forward was knocked out wide to Adam Lallana and the England midfielder curled it into the box for Can, who guided his header back across goal and past Pantilimon.

There was no respite in the second half either, as Liverpool scored twice more before the hour mark.

Lallana got the byline and cut the ball for Firmino to tap the ball home from close range in the 57th minute as the rampant Reds scored four in a match for the fifth time this season.

Liverpool's fifth owed much to Firmino’s strength and determination as he shrugged off Jose Holebas and, even though Watford had superior numbers back, he picked out Mane, who slid the ball home from close range. 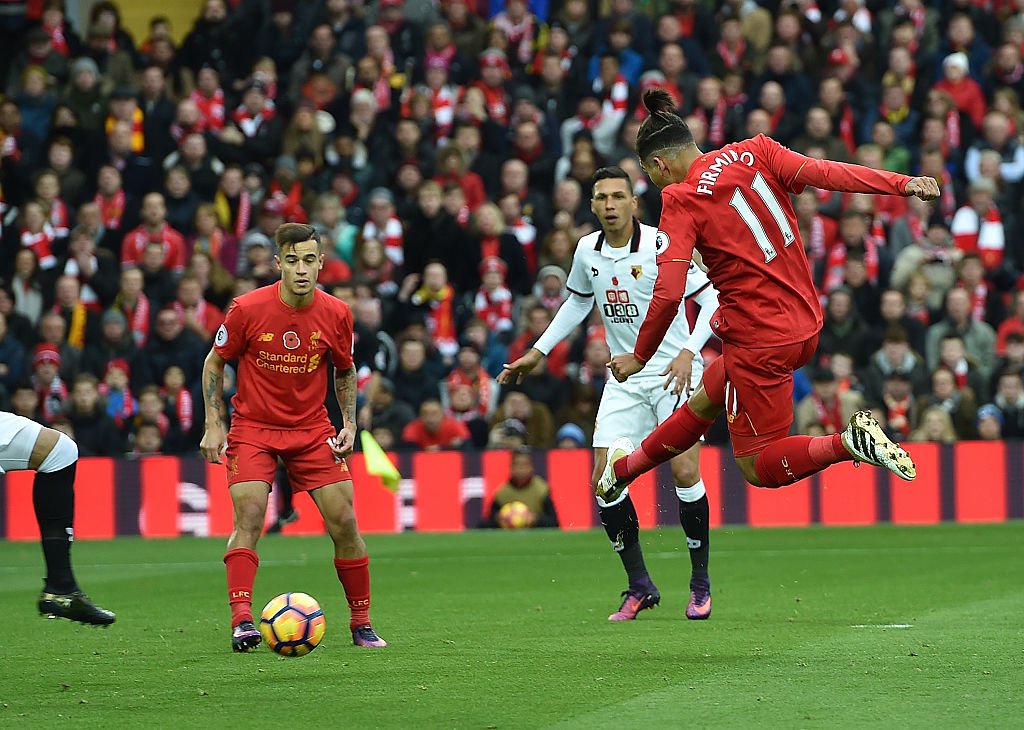 Out-classed Watford were able to give their supporters something to cheer when Janmaat arrowed a low shot into the net from the corner of the box with 15 minutes left.

The last word was Liverpool's, though, as Daniel Sturridge saw his shot parried by Pantilimon in stoppage-time and fellow substitute Wijnaldum knocked the rebound into the net as the Reds went top of the league for the first time since 2014.