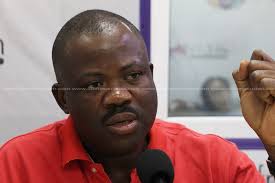 The National Democratic Congress (NDC) has debunked claims by the Vice President that the Mahama administration built only two factories during its tenure.

Responding to Dr Mahamudu Bawumia’s claim, the party says it supported countless individuals to set up factories including those they built from the scratch.

This comes after Dr Bawumia told residents of Breketey in the Adansi South District during his tour of the Ashanti Region that the NDC built only two factories.

“We are doing a lot of things, but the reason we came is the one district one factory which is going on everywhere. We have two hundred and thirty-two factories that are currently on going with 76 completed.”

He added, “The NDCs in eight years built only two factories in Ghana, but the NPP in less than four years is putting up two hundred and thirty-two for everyone to get his or her factory.”

But the National Organizer of the NDC says Dr. Bawumia statement is false. He says Ghanaians will be the best judges.

Speaking to Nhyira FMs Papa Nyameke on Kuro Yi Mu Nsem, Joshua Akamba, explained that, “If it is government support into people putting up factories, then the NDC has done more than Dr. Bawumia can talk about, then obviously the NPP do not come closer. And that is what makes the NDC unique because we don’t even think that those individual factories, we have supported people to build, should make noise about them.”

Mr. Akamba says it will be better for the Veep to keep mute because Ghanaians no longer take him seriously.

“I don’t know whether you still take the vice president of the republic under President Akuffo Addo as a serious person? If I were to be the Veep, I would not even open my mouth to talk in the country.

What people know about him are exaggeration and lying and if you push him to the wall, he would tell you, you and I were not there.”